'I am not racist', says man who berated beer promoter in Malaysian supermarket

PETALING JAYA - The man who berated a beer promoter has come forward to say that he is not a racist.

"I am not racist because my child studies in a Chinese school. I also have friends who are Chinese," said Mohamad Edi Bin Mohamad Riyars, who is known as Edi Rejang.

"At that time I was too tired from work and was angry, and I became too emotional since it had to do with alcohol. I sincerely apologise to the woman," he said in a video posted on Kepong MP Lim Lip Eng's Facebook page.

Mohamad Edi said he initially wanted to buy groceries at that hypermarket, adding that he noticed a woman who was offering beer samples to shoppers as he was walking by a crowd of people.

#EdiRejang has apologized to all Malaysians, especially the lady promoter for his mistake. Let's put this behind us and learn from this. His family is not at fault, so don't make them into victims in this unfortunate incident. We can and shall be better. https://t.co/sKanxhSWRm pic.twitter.com/4iMEbS34IA

"As it was a narrow section, I saw many people congregating there but that place was a non-halal section and I did not check first. As I was very angry at that time, I took out my phone and decided to take a video of that woman, to question her, show that obscene gesture and walk away," he said.

He added that he did not know why he decided to act in that manner, clarifying that it happened spontaneously. 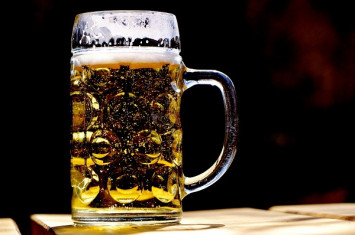 "I did not have any intention to be racist. We are 1Malaysia; the Chinese, Indians and the Malays all have their rights. It was my fault as I had walked through that area which was non-halal but I went in and hurled abusive words in that place," he said.

Mohamad Edi also said that he hoped he would be able to meet the woman in person to apologise.

Lim had said in the video that he was not sure if the woman accepted his apology, but added that he would contact the woman to get her views on this issue.

Mohamad Edi had earlier also apologised to the woman and to all Malaysians in a video that was uploaded on Twitter. 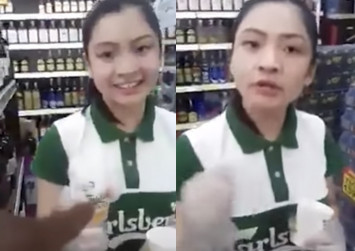 In a statement by Carlsberg Malaysia, the beer promoter has also decided not to pursue the matter further.

On Monday (Nov 21), a video clip of a shopper berating a beer promoter for giving out beer samples in the alcohol section of a hypermarket went viral on social media.

In the video, the girl had remained calm even though the shopper scolded her and demanded to know if she was promoting the beer to "anyone", including Muslims.

As the promoter was about to defend herself in English, he criticised her and insisted that she speak in Bahasa Melayu because this is "Bumi Melayu".

The man then made an obscene hand gesture and spewed vulgarities at her before walking away.

The promoter could be heard in the video saying, "You are hilarious."