I was in a rush: Driver arrested for hitting motorcyclist on KL-Seremban Highway

The driver of the black Ford Ranger surrendered himself to the police the day after the incident.

KUALA KUBU BARU, Malaysia - The driver of the Ford Ranger who was captured on dashcam footage driving recklessly and hitting a motorcyclist along the Kuala Lumpur-Seremban Highway has been arrested.

The man claimed he was in a rush.

The motorcyclist, who was knocked off his bike in the incident, suffered minor injuries.

"Initial investigations revealed the driver, in his 30s, was on his way to meet some friends in Port Dickson, Negri Sembilan.

"He claims he was in a hurry," Comm Azam told reporters after witnessing the handing over ceremony for the Hulu Selangor OCPD at the district police headquarters here on Tuesday (Jan 21).

He said the driver has been remanded for three days to help with further investigations.

"The driver tested negative for alcohol and drugs.

"In this instance, the dashcam footage helped us with our investigation. 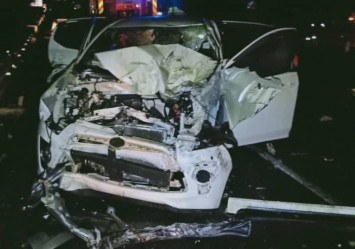 "We need the driver of the vehicle who recorded the footage to come forward and assist our investigation," he said.

"These dashcams can help us in our investigations in crime and accident cases.

"Motorists should, however, make sure to buy dashcams that record in high resolution so that it clearly records details such as number plates," he said.