If you can't beat them, outsmart them 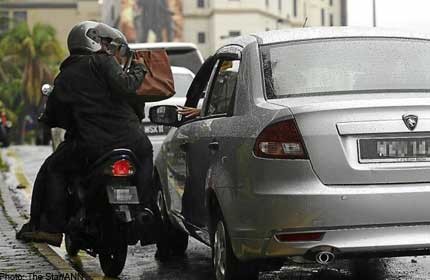 Women should hide handbags under the seat or in the car boot.

MALAYSIA - Smash-and-grab incidents in the Klang Valley are making women drivers jittery as they are the primary target.

The usual modus operandi of the thieves is to smash the car windows of lone women drivers at traffic lights and escape with their handbags and valuables.

Shirley Pu, 35, was one such victim. She was driving home from Bandar Utama (BU) one day and had stopped at the traffic lights in Section 16, Petaling Jaya. Pu had placed her handbag on the floor near the passenger seat.

"Suddenly I heard a loud bang next to me," recounted Pu during a phone interview. "I couldn't see the driver but I did see the pillion rider using something with metal spikes."

Fortunately, the attempt to steal her belongings was unsuccessful.

"But they damaged my car. There were dents and scratches on the passenger door."

Ann Ong Mi Ling, 49, has been a victim twice, most recently at a traffic light near Publika in Sri Hartamas, at around 5pm.

Two riders on a motorbike stopped next to her car and smashed her passenger window. The pillion rider grabbed her bag, which was on the floor of the passenger seat.

Ong attempted to hold on to her bag despite the thief yelling at her to release it. During the struggle, she drove into the car in front of her.

The first incident occurred six years ago under a bridge near Taman Tun Dr Ismail at around 4.30pm.

Her handbag was on the passenger seat and a motorcyclist smashed her window using a crowbar. She managed to grab her phone but got cut on her hand in the process.

Two good Samaritans helped her by knocking into the thief with their car. The rider fell but his accomplice picked him up and rode off with her bag.

Another motorist, Ann, 23, had a traumatic experience one night near Damansara Perdana.

"I was driving home around 10.30pm when I stopped at the traffic lights. I had my earphones on. Suddenly, I heard a loud tapping and looked to my left."

Her passenger window had been smashed. She immediately grabbed her handbag on the passenger seat but the motorcyclist managed to get hold of it. A motorist from behind who saw the incident, drove into the motorcyclist.

"The motorcyclist fell and I sped off at top speed," she said, adding that she suffered minor cuts and spent over RM300 (S$115) to repair her car.

"He was at the traffic lights and was bending down to reach for something in the glove compartment. As he looked up, he saw a man on a motorcycle all set to smash his car window," she said.

However, the motorcyclist then decided to ride off, probably because the intended victim was a man.

These incidents have made more women more aware of their surroundings.

"I don't want to carry a handbag anymore as I am afraid," said Pu.

Even celebrities have fallen victim to such crimes. On Dec 4 last year Malaysian singer Mizz Nina fell prey to a smash-and-grab incident, while a senior cop's daughter fell victim on July 24 this year.

"I know it is the right of every woman to carry a handbag but criminals will never respect this right," said Selangor acting CPO Senior Asst Comm Datuk A. Thaivegan.

"They normally observe the movements of the would-be victims before the latter even get into their cars."

He explained that they then strike at the best opportunity, especially traffic light junctions.

Brickfields deputy OCPD Supt Aida Abdul Hamid explained that the culprits do not "generally aim for the first car near the traffic light and will choose the third or fourth car as they won't be able to move," she explained.

The thieves that operate from one motorbike will have a driver and a pillion rider who smashes and grabs the motorist's valuables. Sometimes, if there is another motorbike, they will pass the handbag to him.

"They generally aim for cars that do not have a tint," said Supt Aida, adding that one in ten cases involved tinted cars.

SAC Thaivegan advises motorists to leave their bag under the seat and not on the passenger seat where it is visible to criminals.

He added that using good security film on windows can help as it will not break so easily when hit by a hard object.

"The suspects will pick their victim at random or even follow them from certain places," he said, adding that most victims were women.

They use objects such as screwdrivers, solid metal pliers and car spark plugs attached to a cable or iron chain to smash windows.

Ku advises motorists to keep their cellphones away and stay focused while driving.

He added they should keep their valuables in the boot and only take what is necessary when driving.

A police source in the CID said the thieves would first determine if the driver was alone.

"A victim who is busy talking on or looking at his or her phone gives the thief added advantage as the person is distracted," the source revealed.

They are on the lookout for any item of value namely handbags, purses, laptop bags or small suitcases left on the front or back passenger seat.

In almost all the cases, the victims are stunned and by the time they realise what has happened, the thieves have sped off.

The source said smash-and-grab thieves are not in a syndicate; they are usually drug addicts who need quick cash to fuel their addiction.

"Sometimes, we are able to solve more than 20, 30 or even 50 cases when we catch them," he said, adding they are often high when committing the crime.