Illegal chemical dumping turns into a big disaster in Johor

PASIR GUDANG - What started as a convenient dumping of chemicals beneath a bridge in Kota Masai has turned into a disaster with almost 500 people, mainly children, treated for respiratory ailments.

The chemicals, believed to contain heavy metal used to dissolve metal at a scrapyard and a chemical factory in Kulai, were discharged into Sungai Kim Kim about a week ago.

Since then, there have been three waves of air pollution as the chemicals got washed downstream towards the Straits of Johor.

It is learnt that there are at least seven schools located along the river.

The latest incident occurred yesterday where 260 people, including students from the two Tanjung Puteri Resort schools, were rushed to hospital with breathing difficulties.

Three people were arrested on Sunday and Monday in connection with the case.

Fishermen in the area are claiming that the thick sludge in the water is causing their boat engines to fail and they have to row their boats out to sea. 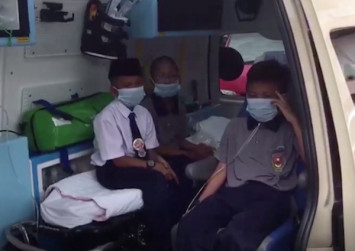 Meanwhile, state Health, Environment and Agriculture Committee chairman Dr Sahruddin Jamal said that the matter was getting from bad to worse.

It is learnt that the National Disaster Management Agency has taken over the handling of the situation at Sungai Kim Kim.

"The number of pupils suffering from dizziness, nausea and vomiting increased gradually. They were rushed to the Taman Pasir Putih Community Hall for treatment," he said.

He added that the Department of Environment came to check the air quality and found that it was fine.

The department confirmed that the incident occurred due to strong winds.

"Firefighters and rescue personnel ordered the closure of the school and instructed the staff and students to go home at 11.15am," he said.