PETALING JAYA - It is insensitive to downplay the repercussions should AirAsia close down in the wake of the Covid-19 crisis, as thousands of lives would be affected due to mass unemployment, says Datuk Seri Tiong King Sing.

The Bintulu MP said this is a response to former Civil Aviation Authority of Malaysia (CAAM) director-general Datuk Seri Azharuddin Abd Rahman comment that AirAsia's demise would be initially felt by the tourism sector, but that "low-cost air travel would soar again after other airlines take up AirAsia's flight slots".

Tiong recently appointed Prime Minister's Special Envoy to China, said such remarks were made without considering the welfare of AirAsia employees.

"If his theory of AirAsia shutting down comes true, does he realise that it would impact the lives of thousands of AirAsia employees, crew and ground staff, not just in mass unemployment?

"How many families would lose their source of income, unable to make ends meet?

"Has he thought about those employees before making his statements? What makes it even more doubtful is whether 'other airlines' have inspired such a statement due to their own interests?"

Tiong said he was partial towards AirAsia and that the government was committed to developing schemes to assist local airlines in facing the economic fallout from Covid-19.

"All these companies have been affected to some degree. Without them, our economic growth would be curtailed too as they provide interconnectivity to encourage business and commerce.

"So, the airlines need the help to overcome the prevent difficulties too.

Tiong said Azharuddin should use his expertise from 40 years of experience as a former CAAM director-general to assist airlines.

"Give your thoughts on their transformation to be sustainable. Otherwise, don't come out to make statements at the expense of their airlines.

"Better to make use of your expertise and experience to improve the aviation sector and help our aviation weather this global crisis. 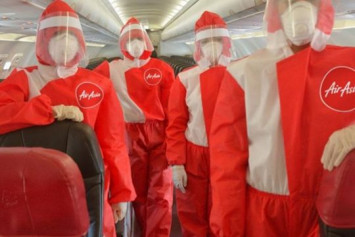 In a report by news portal Free Malaysia Today, Azharuddin was quoted as saying that there was a place for both low-cost carriers like AirAsia and legacy full-service carriers such as Malaysia Airlines.

He said the two airlines should form a partnership but continue being separate entities in order to stay competitive in the market.

He said such a partnership could capitalise on the 600 million population of South-East Asia, with the Asia Pacific area as another catchment area, adding that it could also compete with Singapore Airlines (SIA),

Previously, International Trade and Industry Minister Datuk Seri Azmin Ali was quoted as saying that an Air-Asia-MAB merger was an option considered by the government as the Covid-19 pandemic brought air travel across the globe to a halt.