In for questioning: The two suspects being led to the George Town magistrate’s court to be remanded.

GEORGE TOWN - A fair-skinned foreign man, who police are looking for in connection with the murder of an Irishman here, has fled the country.

Penang police chief Comm Datuk T. Narenasagaran said they were now working with Interpol to track down the man whom they had identified.

The man was last seen going out from the building where victim Brian Patrick O'Reilly, 50, was staying.

He left the building in an Audi, carrying a suitcase.

"We are now working with the International Criminal Police Organisation to look for the suspect. He is key in our investigation," said Comm Narenasagaran. 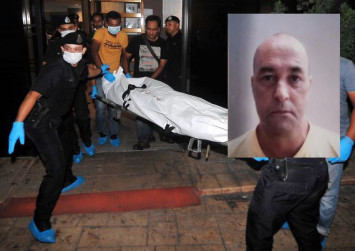 It was earlier reported that a chilling handwritten note was left next to O'Reilly, an information technology manager who was found murdered at a high-end condominium in Jalan Sultan Ahmad Shah here.

Apparently hitting out at scammers, the note reads: "I respected the Police & Still Do But Justice Sometimes has to be Gained. I Hate you Mafia Killing Scamers, I Love My Girl..."

O'Reilly's body, with his hands bound with shoelaces and legs tied with cloth, was discovered by a property agent at 5.15pm on Monday.

Initial investigations showed that the victim, who was posted here a month ago by a Singapore-based company, might have been hit with a pot and frying pan.

There were also stab and slash wounds on his abdomen and neck.

Police have since obtained a three-day remand order on a man, in his 40s, and a woman, in her 30s, to assist in investigations over the murder case.

Comm Narenasagaran said the woman knew the victim while the man was said to be the last person who saw the victim.

A visit by The Star to the building showed there was tight security, and guests who wanted to enter had to register their names at the lobby.

A man, who declined to be named, described O'Reilly as a friendly person who would start conversations and greet the security guards in the morning.

He said the man who has been remanded would deliver cartons of beer to the victim.

"He would send one or two cartons of beer here every few days.

"Then, O'Reilly would come down to the ground floor and pick up the beer," he said.

The case is being investigated for murder under Section 302 of the Penal Code.