It wasn't me: Rosmah charged it to my credit card, says Najib

KUALA LUMPUR - Datuk Seri Najib Razak told the High Court that it was his wife who purchased jewellery worth RM3.3 million (S$1.01 million)and charged it to his AmBank credit card.

The jewellery, bought from a De Grisogono boutique in Italy, was meant as a gift to the wife of Qatar's ex-prime minister Sheikh Hamad Jassim Jaber Al Thani.

"I paid it with my credit card, but I asked my wife to choose, " he said.

This prompted lead prosecutor Datuk V. Sithambaram to say that women would know better in choosing jewellery, to the laughter of the courtroom.

The former prime minister was asked about the details of the purchase during cross-examination at the SRC International Sdn Bhd trial here on Thursday (Jan 9).

Najib had said that the purchase was on a single piece of jewellery, but the prosecutor suggested there were more items purchased from the same boutique on the same date.

Sithambaram: (Referring to a court document) The number of items purchased are 10 items. A single gift for EUR763,500 (S$1.14 million)which was the equivalent to RM3.282 million.

Najib: It looks like a set. A set of 10 items. I have to check with my wife. She bought the items.

The prosecution then moved to questioned Najib on the controversial Chanel watch worth RM466,000 that he bought for Rosmah from the United States on Dec 22,2014.

Sithambaram: You would agree it was quite a luxurious gift?

Sithambaram commented that the purchase obviously had nothing to do with corporate social responsibility (CSR) that Najib had said he did with the monies in his account.

"Compared to the amount I spend on CSR, this is quite small, " Najib replied.

Sithambaram pointed out that Najib had said the watch was "the one and only" personal purchase, and Najib agreed.

Sithambaram: I put it to you, there have been many other personal purchases made from the same credit card.

Read Also
Rosmah on audio recordings released by MACC: 'I have nothing to say' 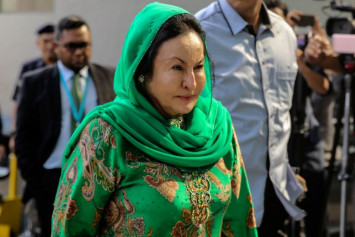 Najib: I agree but they were much, much smaller items. It was more of a convenience actually.

Sithambaram: Compared to the Arab donation, you mean? These would be considered significant for most people.

Sithambaram: Was any of the Arab donation given to the flood victims?

Najib: I can't recall, but the flood victims were well taken care of.