JB petrol station murder: Bounty hunters may have done it

JOHOR BARU - The brutal murder of a man at a petrol station here has taken a new twist. He may have been the target of bounty hunters.

The man who stopped at the petrol station to have his car tyres inflated died of a stab wound to the heart. Police have identified the killers.

Police are now on the hunt for the four men in a white BMW seen at the scene of the attack at the petrol station along Jalan Sri Pelangi on Sunday evening.

Those with information on the case are urged to call the state police hotline at 07-221 2999 or head to the nearest police station.

Read Also
JB petrol station murder: Most did not know what was going on 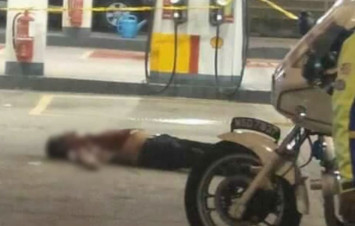 In the video footage of the attack, it seems as if the attackers had tried to bundle the man into the car but failed to do so as he struggled with them. It is then that they are seen running him over in their car.

On Sunday, the 44-year-old man, only known as Ah Chiu at this point, was savagely attacked by four men in broad daylight after getting out of his white Volkswagen Polo at the petrol station to check his tyres.

The horrific attack, which happened at 7.30pm, was recorded and went viral after it was uploaded on Facebook.

The footage showed the suspects, in a white BMW, trying to pull the victim into their car but he put up a fight.

Following a struggle, one of the suspects stabbed the victim in the chest, causing him to collapse to the ground.

The suspects then ran the car over the man twice and threw some firecrackers before fleeing the scene.

Comm Mohd Khalil also said that according to the hospital's post-mortem report, the man died of "stab wound to the heart".

Over at the Hospital Sultan Ismail mortuary, the grieving widow could not hold back her tears after seeing her husband's body in a coffin.

The Vietnamese woman, who was wearing a black T-shirt, sobbed softly on a female companion's shoulder at the mortuary while waiting for the post-mortem to be completed.

Asked if she was Ah Chiu's wife, the woman, clearly distraught, only nodded and turned away, covering her face.

Her companion then said that they did not want to speak to the press.

After claiming her husband's body at 2.10pm, the woman leaned on the coffin in the hearse.

Ah Chiu's body will be placed at Nirvana Memorial Park (Kulai) along Jalan Skudai-Gelang Patah for a few days before burial.