A source said the vessel was navigating through the busy Monday morning waterway along the Singapore Strait at eight knots, making its way to the Batu Ampar port.

However, the vessel did not head to the port as scheduled. Instead, it anchored near the Pulau Nong lighthouse at the entrance to Tering Bay around 9.30am, the source told The Star.

"The vessel would be docked in Batam, waiting for further instructions from Jakarta on when it would be handed over to the Malaysian authorities."

The Star reported that Equanimity left the Tanjung Benoa port in Bali on Thursday (Aug 2) and was headed for Batam.

In February, the vessel was seized at the request of US authorities as part of a multi-billion dollar corruption investigation launched by the Department of Justice (DoJ) related to 1Malaysia Development Berhad (1MDB). 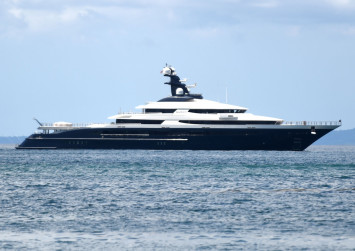 However, the vessel was not allowed to leave Tanjung Benoa port.

In July, Indonesian police seized the yacht again following a formal request for legal assistance from the US authorities.

Reuters reported that the decision to hand over the yacht to Malaysia was reached following a personal request made by Prime Minister Tun Dr Mahathir Mohamad who visited Indonesia in June.