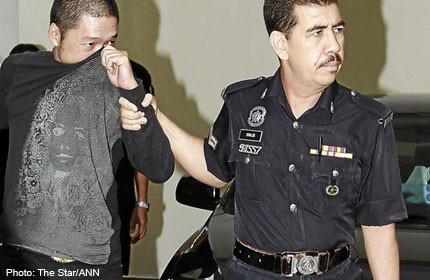 GEORGE TOWN - A man who allegedly rammed his car into another vehicle and threw explosives at it has been slapped with three charges.

Unemployed Chin Soon Hock (above), 38, was charged with causing fear by using a car to chase and intentionally hit another car driven by Ong Cheng Cheang, 24, at about 2.20pm on Monday in Love Lane.

He was also charged with using explosives with malicious intent to cause hurt and damage property.

Chin claimed trial to both offences at a magistrate's court here yesterday with another person who is still at large. He also denied a third charge of consuming methamphetamine at the northeast district police headquarters here at about 11am the following day.

He was charged with the first offence under Section 506 of the Penal Code for criminal intimidation which carries a jail term of two years or a fine or both.

Defence counsel Jason Khor said Chin was the sole breadwinner of the family as his wife was not working. "He has six children aged between four and 19 years," Khor said when asking for a low bail amount for his client.

Deputy public prosecutor Nurak­mal Farhan Aziz proposed a total bail of RM7,000 for the first two charges and RM3,000 for the drug charge, saying that bail should correspond with the seriousness of the case.