He said the misunderstanding arose following recent incorrect reports by the local media.

Osman said it was, for example, incorrect to report that the project did not contribute to growth in Johor and the country.

"We need to come forward and clear the air on the project," Osman said at a press conference at his office in Bangunan Dato Muhammad Jaafar in Kota Iskandar here on Tuesday (Sept 4).

According to him, the state government had received some RM630mil in taxes and land premiums, including RM30mil in dividend payments, from the Forest City project.

He added that the federal government had, in turn, received RM309mil in taxes, including corporate taxes, fees and levy. 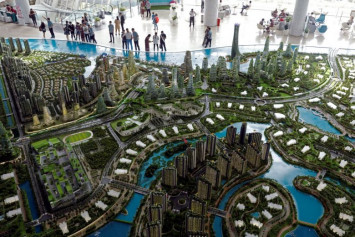 Osman said Country Garden Pacificview Sdn Bhd (CGPV), the developer of the project, had invested about RM11.5bil in the project in Gelang Patah near here and awarded contracts worth RM1.4bil to 150 local contractors.

"The company has employed 1,545 workers for the project, of which 80 per cent are locals and all of them pay income taxes amounting to RM51mil," said Osman.

He also rubbished claims made by certain parties that Chinese buyers buying a house from Country Garden Holdings in China would get a free house at Forest City.

"For your information, CGPV and Country Garden Holdings have two different accounts where the former handles buyers for Forest City and the latter for projects in China," said Osman.

He said the 700,000 residents for Forest City would comprise not only buyers from China but also locals, tourists, professionals and students over the next 25 years when the project is completed.

"We are confident that Malaysia has comprehensive laws that protect the rights of foreign investors as well as foreign property buyers," said Osman.