JOHOR BARU - It was pandemonium at a shopping mall here when the Tunku Mahkota Johor turned up unexpectedly and offered to foot the grocery bill of every shopper up to RM3,000 (S$1,016).

Apparently, Tunku Ismail Sultan Ibrahim, who was at the mall for less than five minutes, eventually spent more than RM1mil on the groceries.

The happy moment for the lucky shoppers happened at about 6.45pm yesterday when he arrived at AEON Tebrau with his wife Che Puan Khaleeda Bustamam. 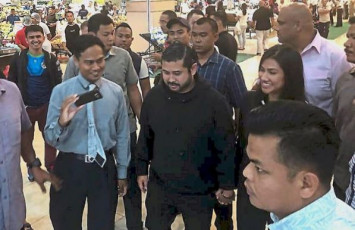 Tunku Ismail promptly announced that he would be paying for the groceries of up to RM3,000 for each of them.

Most shoppers were seen taking up to three trolleys each. The mall had to increase their security as people crowded the place.

At about 8pm, the mall had to bring down its shutters as more people started to arrive when the news spread.

Among the top items taken by the people included rice, cooking oil, fresh fruits and vegetables, flour, tea and other basic household items.

R. Sivalingam, 45, said that he was grateful for Tunku Ismail’s generosity, which helped him save a lot of money. “I am really thankful to Tunku Ismail because I’m able to have at least two months’ worth of groceries,” he said when met at the mall.

Another shopper, Rafidah Mohd Khalid, 38, said she got items such as three packets of rice, two bottles of cooking oil, vegetables and other needs for her family.

“We are the lucky ones as Tunku Ismail helped to pay the bills. If it’s not for him, many of us would not be able to shop for so many things,” she said.

Retiree Tan Kuok Hua, 50, said he thought it was a prank initially when he heard that a VIP would pay for the groceries.

“I received a message on my WhatsApp that Tunku Ismail was there and he would be paying for the groceries,” he said.

He went there to verify the news and found that shoppers were making a beeline to the place.

The Johor royal family, he said, had always been kind and understood the plight of the ordinary people.

“For commoners like me, this is very huge. This is why we Johoreans love and respect the royal family,” he said.