JOHOR BAHRU - For the folk here, the possibility of having a third bridge linking Malaysia and Singapore will be good news as the congestion along the two land links worsens.

To them, the third bridge should be built in Pasir Gudang as this could help ease the traffic crawl on the Johor Causeway.

Presently, more than 367,000 people use the two Customs, Immigration and Quarantine complexes (CIQ) daily, with 254,000 people using the Johor Bahru side while the rest opt for the Second Link.

The subject of a third bridge came about on Monday at the Johor state assembly when Home Minister Tan Sri Muhyiddin Yassin noted that both the CIQs were already reaching their maximum capabilities and that a third bridge would resolve congestion problems.

He said he had been appointed by the Federal Government to head a committee to oversee the congestion at both checkpoints.

The news was timely to people like factory worker Hamdan Mohd Noor, 52, who had to commute regularly between the two sides.

"However, much has been said about this for many years. I hope that both governments will put aside their differences and go ahead with this project," he said.

It was also his hope that work on the rapid transit link between the two sides would start soon. 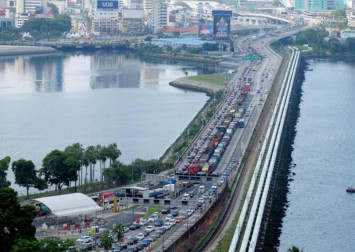 For P. Thiagarajan, 72, the bridge project should be constructed in Pasir Gudang as most commuters come from surrounding areas including Ulu Tiram and Masai.

For now, he said that the traffic jam at the Johor CIQ was unbearable especially during the long weekends and festive seasons.

Auxiliary policeman S. Sathia, 44, said that such a link would improve the current condition at the CIQ.

A connection from Permas to Changi or Sembawang would definitely help reduce congestion, he said.

Mandarin tutor Yong Hong Eng, 51, who has been working in Singapore for 20 years, has seen how the condition at the causeway has deteriorated over the years.

She welcomed the suggestion for a new link and hopes that it would be made accessible for the majority.