PASIR GUDANG - Johor Mentri Besar Datuk Dr Sahruddin Jamal has made a public apology on behalf of the state government over the air pollution that hit the state last month.

He admitted that there were many things that the government could improve on in handling the situation.

"As the state leader, I humbly ask for forgiveness from the residents here and promise to rectify the weaknesses," he told a town hall session which was mostly attended by residents, teachers and representatives of schools and Parent-Teacher Associations at the Pasir Gudang Indoor Stadium yesterday.

There have been recurring pollution incidents here including on July 18 when students from five schools complained of vomiting and breathing difficulties.

Dr Sahruddin said more than 700 people attended the town hall meeting held to provide the people with the correct information and to explain the measures taken by the government in dealing with the situation.

He pointed out that the government had a long-term plan in tackling the issue including relocating factories to another area.

"Pasir Gudang is already crowded with industries and residential areas and we are looking to move certain factories to another location."The Land District Office and Pasir Gudang Municipal Council are doing research to find an ideal location for a new industrial area," he said when met after the town hall meeting.

Earlier, members of the residents' group Badan Bertindak Penduduk Isu Pencemaran Alam (BBPIPA) held a peaceful demonstration outside the stadium against the state government over what they felt was a slow response by the authorities over the pollution problems.

They held placards and two large banners, which read "Welcome to Toxic Area" and "Mana Hilang MB Johor" (Where has MB Johor disappeared to). 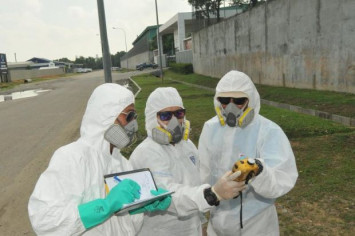 And one of the members did try to jump in front of the black Honda Accord, the mentri besar's official car, when it arrived at the venue.

However, quick action by the security personnel stopped the man from causing any trouble.

After the town hall session ended, Dr Sahruddin walked over to BBPIPA members to speak with them.

"I would like to thank Dr Sahruddin for meeting us. And I hope that after this, the government will conduct another town hall session just for the residents and victims," he said, adding that the group represented about 15,000 residents here.