Johor Sultan: Don't be a busybody

Keeping a close watch: Sultan Ibrahim said although he is overseas at the moment, he was closely following the developments in Johor and Malaysia.

The Johor Ruler said he was currently overseas but was closely following the developments in Malaysia and Johor in particular through reports from all quarters.

"I want certain quarters to stop making noise and fighting about politics and focus on efforts to take care of the nation instead.

"On matters concerning Johor, don't be a busybody in meddling into the state affairs as this sovereign state still has a Sultan. 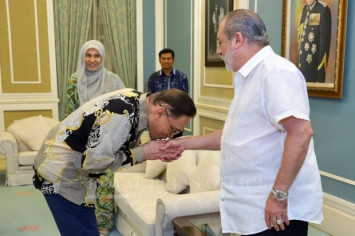 His Majesty is scheduled to return at the end of the week.

Meanwhile, a Johor Baru-based lawyer said the Johor Sultan has the absolute right to appoint a mentri besar as stipulated under the Undang-undang Tubuh Negeri Johor 1895.

Ahmad Solehin Abd Ghani said Undang-undang Tubuh Negeri Johor, Item 3 (1), stated the matter clearly and in the issue of appointing the mentri besar, His Majesty does not have to act on advice from any quarters.

"However, through 'convention', parties that won (the election) would send several names as mentri besar candidate to the Johor Sultan for His Majesty's consideration and in this matter, Pakatan Harapan should send the names," he said in his Facebook post.

Ahmad Solehin added that the Johor Ruler would review the candidates and would only appoint the mentri besar if the candidate was agreeable by His Majesty himself.

"If the candidates were not agreed to by His Majesty, then the party must send another list to (the) Johor Sultan until it receives His Majesty's agreement and consent to appoint the candidate as Mentri Besar.

"The statement saying Sultan Johor does not have any role and right to appoint the Mentri Besar is incorrect, sidetracks and purposely made to confuse the community about the duty and role of His Majesty in the government system, especially in Johor," he said.

Political analyst Dr Mohd Akbal Abdullah said it was important for both the federal government and Johor to agree on who would become the next mentri besar.

"It is the standard operating procedure for the Sultan to appoint whoever His Majesty deems as the best person to become the mentri besar," he said.

"The Prime Minister cannot appoint or make any person as the mentri besar."

On whether the dissolution of the state assembly would be the best solution, Mohd Akbal said it was better to not go into it, as it will create another problem.