Artist's impression of the Woodlands North Station along the Rapid Transit System link.

JOHOR BARU - Johor Ruler Sultan Ibrahim Sultan Iskandar is willing to hand over his plot of land in the state to the federal Pakatan Harapan (PH) government without any cost if the site is utilised for the Rapid Transit System (RTS) rail project to Singapore.

His private secretary Jaba Mohd Noah said on Saturday (May 4) that Sultan Ibrahim had expressed his disappointment with news report claiming that his ownership of a plot of land in Bukit Chagar would drive up the cost of the project.

"The RTS project must be continued as His Majesty understands the plight of many people that travel into Singapore on a daily basis."

The statement, which was also posted on Sultan Ibrahim's official Facebook page on Saturday, comes after Prime Minister Mahathir Mohamad said on Friday that his government is keen to take hold of a 4.5ha plot of land in Bukit Chagar to build the RTS project.

"We will demand the (return of) the land. If there was a transfer by any parties, they must go through the due process. We have not received the full report, just rumours from the press that the land was taken by the Sultan of Johor." 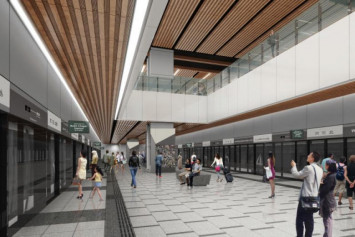 News portal Malaysiakini, which quoted sources, reported on Friday that the piece of land is allegedly now owned by Sultan Ibrahim, though it was earlier owned by the Malaysian government.

The previous Malaysian government and Singapore had agreed to build the railway link from Bukit Chagar - near the Johor Baru checkpoints, immigration and customs (CIQ) building - to the upcoming Woodlands North MRT station.

The Woodlands North station is on the Thomson-East Coast MRT line or TEL.

The year-old Pakatan Harapan government on March 27 requested for a six-month deadline extension for it to respond to Singapore on matters related to the RTS project.

This was because Malaysia wanted to review "the RTS Link Project's scope, structure and costs previously agreed between the two countries", Singapore's Ministry of Transport (MOT) in a statement on April 4.

About 400,000 Malaysians work and live in Singapore, with most of them making the daily commute from Johor and returning in the evening.

Previous reports sat the RTS link can carry up to 10,000 passengers per hour in each direction.