JOHOR BARU - The chemical pollution in Pasir Gudang has led to mass buying of face masks, with many outlets having run out of stock.

Besides the N95 (respirator) masks, ordinary face masks are also in high demand.

Many outlets in the area had run out of supply since Tuesday. Checks at five outlets in Pasir Gudang showed empty shelves.

According to the workers, they were not sure when the new orders would arrive as "even the suppliers do not have stock". They advised the public to look for masks in other areas such as Johor Baru.

"There are several types of face masks available. The ones we use in the medical field is known as the surgical mask, which can offer the wearer better protection against infection.

"There are various types of N95 in the market which are commonly used by those handling gases or pollution," he said at the KPJ Pasir Gudang Specialist Hospital on Wednesday (March 13). 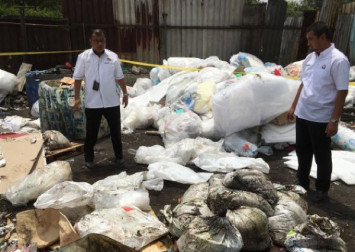 The state government has ordered a total of 111 schools in and around Pasir Gudang in Johor closed pending further notice.

Education Minister Dr Maszlee Malik said he made the decision after being told that the situation had reached "critical" level. He directed all teachers involved to "stop work" at once given the severity of the situation.

The list included the 13 schools closed down earlier due to chemical pollution in Sungai Kim Kim, which had affected almost 300 people.

Speaking to reporters during a visit to Sekolah Bimbingan Jalinan Kasih, Maszlee said the type of poisonous gas emitting from the river in question had not been ascertained.

"While waiting for updates from the Department of Environment (DoE), the ministry is keeping close tabs on the situation.

"The Johor government and State Disaster Management Committee will update us on the latest through the Johor Education Department," he said.

Maszlee said the decision made on the school closures and others were based on the advice of the committee which comprised experts.

"The ministry's top priority is the safety of students, teachers and support staff whom we regard as family. The best must be done for them. We will hold a discussion with the committee,'' he said.

Saying he was saddened and angered by the pollution of Sungai Kim Kim, the minister hoped that justice would be served on the criminals who had caused much suffering to "my education family".

About 266 victims are being treated at the Sultan Ismail Hospital, with 42 warded at the Sultanah Aminah Hospital since the chemical pollution was reported last Thursday.

Johor executive councillor Dr Sahruddin Jamal was reported to have said that a contractor licensed by the DoE would be appointed to clean up the river.

He said the affected stretch spanned 1.5km and the exercise would be coordinated by the DoE and Drainage and Irrigation Department.

"Prosecution has yet to be carried out until we receive further instructions from the Deputy Public Prosecutor's Office," he said in a statement here on Thursday (March 14).

It was reported on Wednesday that the factory owner was expected to be charged today for polluting the river.

Energy, Technology, Science, Climate Change and Environment Minister Yeo Bee Yin said the suspect, whose factory is in Kulai, would be charged under Section 34B of the Environmental Quality Act 1974.

She said the owner faced a maximum imprisonment of five years and a fine of RM500,000 if found guilty.

Saying the culprit should face harsher punishment, Yeo said on Wednesday she had spoken to Attorney General Tommy Thomas about slapping additional charges on the suspect.

"The DoE will charge the suspect first," she said, adding that it had ascertained a number of chemicals from the samples taken.

"The d-limonene is from the recycling of tyres and this led us to the suspect in Kulai," she told reporters on Wednesday at the operations room of the Pasir Gudang Municipal Council. The minister said the priority was to contain the pollution and prevent it from spreading.

She said the DoE would also install gas detection monitors around Pasir Gudang to check on air quality in the area.

It was important to detect the toxic pollutants at different altitudes and also other unknown chemical compounds, she added.

Asked if the worst was over, Yeo said she was more worried about the unknown chemicals.

On long-term measures to protect the environment, Yeo said the DoE would be carrying out checks on 252 chemical factories in the area after the crisis was over.

Asked about other culprits to be hauled to court, Yeo said there was a possibility, but added that a probe would need to be conducted first.