KUALA LUMPUR - Vietnamese Doan Thi Huong, who escaped the gallows after she pleaded guilty to an alternative charge in the murder trial of North Korean Kim Jong-nam, will be a free woman come May 3.

The 30-year-old is expected to be released from the Kajang Women's Prison at 9am on that day.

Doan, who was sentenced to three years and four months in jail by the Shah Alam High Court, is entitled to a one-third remission on the prison sentence which was ordered to run from the date of her arrest.

Arrangements have been made for Doan to board a flight to return to her home country that same day. 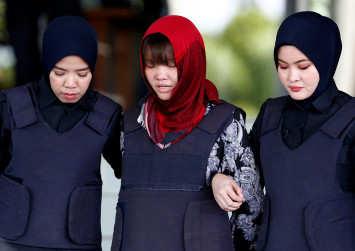 According to her lawyer Datuk Naran Singh, Doan will be boarding an evening flight on Vietnam Airlines.

Doan was sentenced to three years and four months in jail by the Shah Alam High Court after she pleaded guilty to a new charge under Section 324 of the Penal Code for voluntarily causing hurt by dangerous weapons or means.

According to the alternative charge, Doan and four individuals still at large had caused hurt to Kim Chol, an alias used by Jong-nam when he travelled, by using a dangerous substance known as the VX nerve agent.

Doan was previously charged under Section 302 of the Penal Code and faced the mandatory death penalty if found guilty.