Karpal's son told him not to go 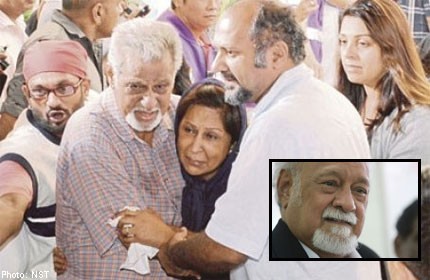 IPOH - Veteran DAP leader and one of Malaysia's most prominent lawyers, Karpal Singh, was killed when his luxury MPV was involved in a collision with a lorry along the North-South Expressway (NSE) here early yesterday.

Both were killed on the spot due to the impact.

Karpal's son, Ramkarpal, 38, who was traveling in the same vehicle, sustained minor injuries and received outpatient treatment at the Kampar Hospital.

An Indonesian woman, believed to be their maid, was reportedly in serious condition at the Raja Permaisuri Bainun Hospital, here.

The 1.10am crash occurred at Km306.1 of the NSE, heading north, near Gua Tempurung, regarded as among the deadliest stretches on the highway.

Karpal, who was Bukit Gelugor member of parliament, was on his way to Penang to attend a court case at the Penang High Court yesterday.

According to the lorry driver's statement, he was driving on the left lane when the MPV rammed into the side of his lorry, which was laden with cement, steel and mosaic tiles.

However, Selvam claimed he failed to brake on time when the lorry swerved into his path.

Police are appealing for eyewitnesses to establish the cause of the accident.

Checks on the MPV showed that it had 29 speeding tickets, of which 15 had yet to be settled.

Earlier, the Kampar Hospital was a scene of grief when Karpal's family arrived to claim his remains.

His son, Gobind, was seen hugging his mother, Gurmit Kaur, who was sobbing uncontrollably.

Gurmit was heard wailing "Why?" "Why?" "Why lah?" while being consoled by her son.

Gobind said Karpal had visited him at the Pantai Hospital in Bangsar just hours before the accident.

Gobind, who had been in hospital since Monday for a health problem, advised his father not to rush back to Penang that night.

"I told him to only go back this morning. However, he insisted upon returning to Penang to prepare for his court case."

He said the state flag would also be flown at half-mast from yesterday until the funeral.

The funeral would begin with the public paying their last respects at the Dewan Sri Pinang from 9am to 11am, after which Karpal's remains would be taken in a procession to the Batu Gantung crematorium.

[[nid:101823]]
SUBSCRIBE TO OUR NEWSLETTER
Your daily good stuff - AsiaOne stories delivered straight to your inbox