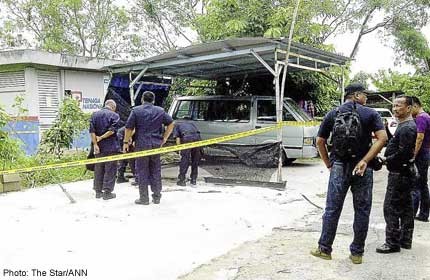 KOTA BARU - Kelantan police have formed a special task force to investigate the bomb explosion that killed a clerk in Tumpat on Sunday.

He said police would conduct a full investigation in which all aspects would be looked into.

"This includes the motive and identifying if the bomb used was a fish bomb or a bomb used by militants in southern Thailand.

"Early investigations show that the package was filled with homemade explosives. We have taken samples of the residue and sent it to the Chemistry Department to determine the type of explosive used," he said at the state police headquarters yesterday.

In the 11am incident, the victim, Mohd Yusrizal Mat Zain, 32, died after the package, which he had taken from the top of a Naza Citra MPV in front of his in-law's home at Taman Seri Periuk in Kampung Periuk, explo­ded.

Both his hands were severed and he was disemboweled.

On the second explosion heard at 4.40pm, Mazlan said it was not caused by the residue of the explosion that killed Yusrizal but from rubbish found in a polystyrene container.

He said the incident was an isolated case and the public need not worry.

In an unrelated case, Mazlan said that a 29-year-old man was arrested in Kampung Pantai Damar, Bachok, last Sunday for the alleged murder of Mohd Nazaimi Mat Nawi, also 29.

The victim, who was sleeping at his uncle's home, was stabbed with a knife at 3pm.