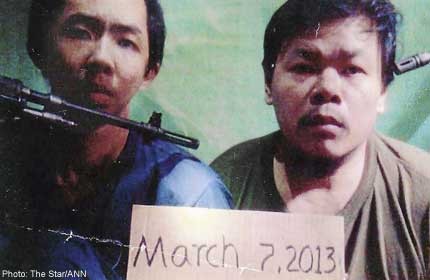 PETALING JAYA - A Malaysian kidnapped in Lahad Datu in Sabah last year escaped in Jolo, southern Philippines, when his abductors were busy.

Chong Wei Jie, 25, managed to escape when his shackles became loosened and he fled to the village of Pasil in Indanan, in Jolo island.

"The victim appeared to be haggard and tired when he was found by the police forces on patrol," said Jose Joriel Cenabre, commander of Task Force Sulu.

"He was weak and emaciated, with long hair and has a moustache now."

Wei Jie also told police that his 33-year-old cousin Chong Wei Fei, who was also kidnapped, died on April 8 of illness while in captivity.

"He said he saw his cousin's body shaking, and then he stopped breathing," Orbito said.

Cenabre said Wei Jie would be flown out from Sulu and taken to the Malaysian Embassy in Manila.

The Chongs, originally from Negri Sembilan, were abducted by Filipino gunmen on Nov 13, last year at the family's bird's nest farmhouse in Lahad Datu, Sabah, and taken to Jolo in southern Philippines.

Philippine Daily Inquirer reported that a policeman saw Wei Jie walking on the highway in Pasil at around 7am yesterday and asked if he needed help.

"We still don't have the complete details of how they were abducted and what kind of illness afflicted his cousin," said Cenabre.

The Inquirer reported Deputy director of the Directorate for Integrated Police Operations in Western Midanao, Jose Bayani Gucela, as saying that Wei Jie was taken to the Sulu provincial hospital in Jolo island for a medical check-up. He was to be transferred later to Zamboanga City for a debriefing.

On Friday, The Star published the photographs of the cousins, believed to be taken on March 7 in Jolo.

Sabah Police Commissioner Datuk Hamza Taib said they had not received any information or calls from their Philippines counterparts on the fate of the cousins.

The Philippines news reports brought joy and sadness among friends of the Chong family, who had prayed for the safe return of the two, said a friend of the family.

The Chong family had come to Sabah in early 2000 after their pig farms were closed following the Nipah virus incident.

Wei Jie's father had also died during that time.