PETALING JAYA - Perikatan Nasional lawmakers hailed the royal address by the Yang di-Pertuan Agong as a timely and clear message for politicians and the people to unite in the face of Covid-19.

"His Majesty wants MPs to set the example in sowing positive values among the rakyat.

"Differences should not necessarily end with animosity and slander against each other.

"Instead, it should be the basis for new ideas to develop and unify the nation," the MCA president said.

Petra Jaya MP Datuk Seri Fadillah Yusof said the King was clear in his message for politicians to end their politicking.

"In short, the Yang di-Pertuan Agong wants politicking to stop and politicians to serve the country and the people. All of us need to unite to face all the challenges if we are to succeed," he said.

Pontian MP Datuk Seri Ahmad Maslan, who is Umno secretary-general, said the King's message was timely in light of the enormous challenges brought about by Covid-19.

"The rakyat is facing hardships due to Covid-19. Politicians must act in a very sensitive manner according to the current situation.

"They should not add to the hardships through actions which could destabilise the administration," he said.

Santubong MP Datuk Seri Dr Wan Junaidi Tuanku Jaafar said the King has used the opportunity to clear the air over the recent appointment of the prime minister and formation of the new government.

He said there were many misconceptions over the matter, which the King had put to rest in his address.

"MPs must be the example of politics of harmony by carrying themselves well and professionally.

"The King wants politicians to avoid doing things that could affect peace in the country," he said. 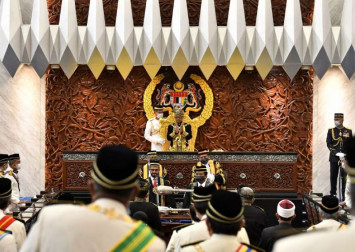 Parit Sulong MP Datuk Dr Noraini Ahmad said that the King clarified his decision on the appointment of the prime minister recently.

"The King is responsible for the appointment of the prime minister as the political crisis affecting the nation could not be prolonged without any end in sight," she said.

The Umno Wanita chief also said the King had stressed the need to increase research and development while supporting education and skills training programmes.

Sultan Abdullah delivered the royal address when opening the third term of the 14th Parliament yesterday.

Parliament was adjourned and will meet again on July 13 for 25 days.