There will also be a domestic service that will see the train stop at all stations along the route in Malaysia, and this will also run every half-hour.

Loader said the proposed frequency was based on projections made by the company, taking into account that currently there were some 60 flights a day between Kuala Lumpur and Singapore.

"The non-stop express service will reach Singapore in 90 minutes and passengers boarding at Bandar Malaysia station will be able to clear Singapore Immigration before boarding.

"Those taking the domestic service from other stations such as Seremban or Melaka will have to clear Singapore Immigration at Iskandar Puteri station and then take the train into Singapore," he said at a media briefing here Friday.

Read Also
If you're asked to invest in S'pore-KL high-speed rail project, it's a scam: LTA 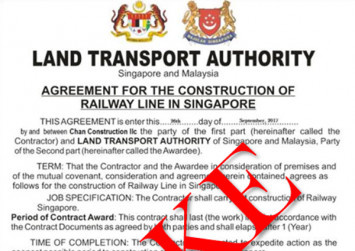 Loader said the project is due to start at the end of next year and is scheduled for completion in 2026.

"We are now conducting a public inspection exercise and getting the people's feedback on the proposed alignment as well as other related matters.

"I am happy to say that we have received more than 9,000 comments and suggestions during this public inspection exercise which will be held till Jan 31 (2018)," he said, adding that the exercise began on Nov 1 this year.