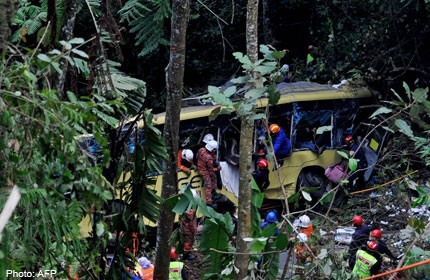 MALAYSIA - At least 37 people are dead after a bus tumbled into a deep Malaysian ravine yesterday in the country's worst road accident, an official said.

The toll could climb however, as 16 other passengers were injured, with hospitals reporting that some are in critical condition. Police said the bus was carrying 53 passengers when it tumbled down a steep 70m slope in the Genting Highlands, about an hour's drive from the capital Kuala Lumpur.

"Thirty-seven are dead - 13 women and 24 men," Mr Christopher Chong, a fire official at the scene, said by phone.

Mr Chong said the bus was heading downhill when the driver apparently lost control at a bend in the road.

Amateur photos posted on the Internet showed damage to the road's concrete embankment, suggesting that the bus had smashed through the barrier.

Reports have said that most of the passengers were Malaysians, but staff at Kuala Lumpur Hospital said a Thai man and a Bangladeshi man were among the injured taken to the hospital.

More than 200 firefighters, police and medical officers used ropes and cranes to reach the bus.

Lines of rescuers clinging to an orange rope for support were seen pulling injured victims out of the bus, which was lying on its side in thick vegetation.

The rugged terrain forced rescuers to rig up an improvised pulley system to raise bodies and injured victims in a time-consuming operation, media reports said.

The police said the bus was part of a regular line that ferries visitors between the capital and the hill resort.

The road leading up to the Genting Highlands is notoriously steep and winding, but serious accidents are rare.