Loh Kean Yew lost the match to his former teammate at the Malaysia Open.

But the Hong Kong badminton No 2 will now face an even sterner test when he takes on world No 1 Viktor Axelsen in Thursday's second-round encounter.

The 25-year-old Lee and Singapore's Loh shared a flat during a training camp in Dubai last month, but went toe-to-toe at the Axiata Arena in Kuala Lumpur.

Lee fell behind 10-5 in the first set, but he fought back to win six points in a row and take the lead, before edging it 21-19 over world No 9 Loh.

The world No 15 led throughout the second set and took it comfortably by a score of 21-12, with the match lasting less than 40 minutes.

"Our new men's coach Wong Tat Meng played an important role, whether it was with his analysis before the game or his courtside advice - it helps the player deliver their best and take the momentum," Hong Kong head coach Tim He Yiming said.

"With Tat Meng's advice, Lee played aggressively on the front court, which caused his opponent to lose momentum. It also shows that the player has faith in him."

Coach Wong, who led South Korea to their first Uber Cup title in 12 years last month, has signed up with Hong Kong on a two-year contract.

Lee will next face another familiar face from Dubai in Denmark's Axelsen, who hosted the training camp, and defeated Frenchman Brice Leverdez 22-20, 21-7 on Tuesday.

Lee - who was invited to join Axelsen's camp, where he trained alongside Loh and India No 1 Lakshya Sen - will be up against it but has a blueprint for defeating the Tokyo Olympic champion.

"Lee is the underdog in the second round, but he beat Viktor in the Hong Kong Open in 2019, so anything is possible," coach He added. 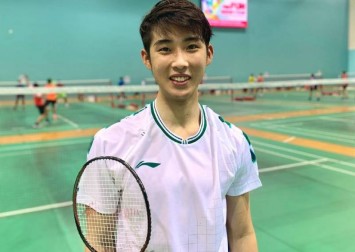 "Suet returned to training last week, and based on her performance, I believe she has recovered well," coach He said of the 30-year-old Tse, who tested positive for Covid-19 this month. "Their experience helped them win today."

Also in action in the mixed doubles were Hong Kong's Chang Tak-ching and Ng Wing-yung, who were beaten 23-21, 8-21, 21-18 by Rehan Naufal Kusharjanto and Lisa Ayu Kusumawati of India.

There was a shock in the first round of the women's singles, with world No 1 Akane Yamaguchi losing 21-14, 21-14 against world No 31 Gregoria Mariska Tunjung of Indonesia.

On Wednesday, Hong Kong No 1 Angus Ng Ka-long will compete in the first round of the men's singles against Mark Caljouw of the Netherlands.