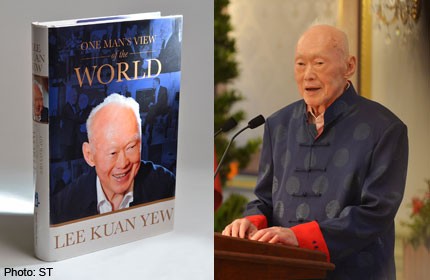 Singapore's former Prime Minister Lee Kuan Yew speaks during his book launch at the Istana in Singapore on August 6, 2013.

PETALING JAYA - Malaysians hoping that Barisan Nasional's 1Malaysia concept can usher in a new era for race relations may be unrealistic, but those counting on the Opposition to do the same are not very much less so, said Lee Kuan Yew.

The former Singapore Prime Minister said that Datuk Seri Najib Tun Razak's 1Malaysia campaign, launched in 2008 to win back support from Chinese and Indian voters, had not lived up to the excitement it created.

"But has the ground moved with him? Has there been thunderous applause from the Malays at 1Malaysia? It may have been that he started with ambitious plans. But it appears that political realities may have conscribed his subsequent actions," he said in an excerpt from his new book One Man's View of the World which was launched in Singapore on Tuesday.

Lee, 89, said it was impossible that Najib could win their votes back without losing support from the Malays, his party's core supporters.

However, he did not express confidence in Pakatan Rakyat's ability to get rid of special treatment for the Malays in the unlikely event that it should come to power in future.

He described the coalition as an "opportunistic and ad hoc group not held together by even a vaguely coherent set of ideas but by a common desire to unseat the Government".

"As long as it does not actually hold the reins of the Federal Government and therefore does not have to implement the said multiracial policies, some semblance of unity can be maintained.

"The moment the bluff is called and it is handed the full power to push ahead, it will either be torn apart within or be paralysed by indecision," he said.

Lee noted that Malaysia's race-based policies had caused it to lose ground in a globalised world, by creating talent flight to other countries, with the majority seeking employment in Singapore.