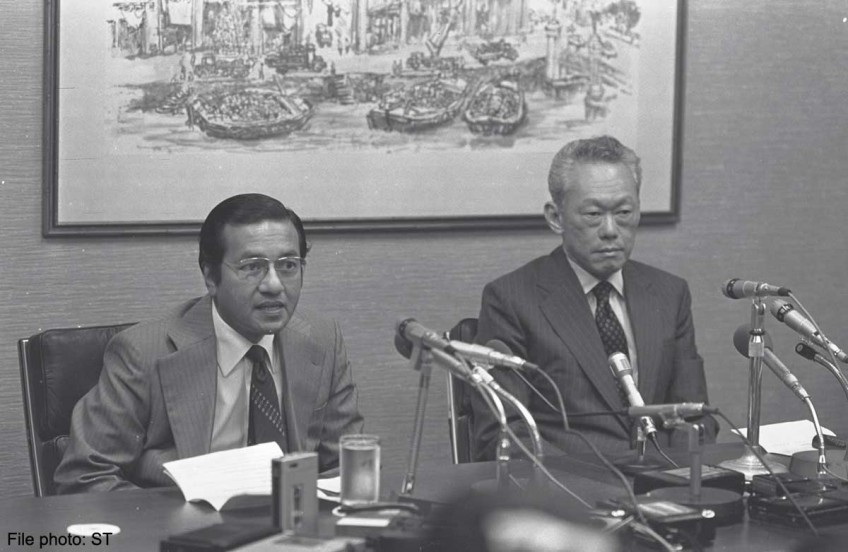 KUALA LUMPUR - The tenure of Singapore's first prime minister Lee Kuan Yew was marked by the island republic's brief but tumultuous time when it was part of Malaysia.

Singapore was part of Malaysia from Sept 16, 1963 to Aug 9, 1965, which was marked by tense relations between Lee and leaders from Umno and other Alliance parties.

When Singapore left the Federation of Malaysia on Aug 9, 1965, the event - the most tumultuous in Lee Kuan Yew's career - grabbed headlines the next day around the world.

"Singapore is out" was splashed on the front cover of The Straits Times, where it was mentioned that there had been a secret signing of the island republic's independence by both governments.

Malaysia's first prime minister Tunku Abdul Rahman was quoted as saying that Singapore's withdrawal had been his idea, adding that otherwise, there would be no hope for peace.

The Straits Times also reported that the separation led to the busiest day on the Singapore's stock exchange that year, with some 646,900 shares traded.

However, on the Causeway - for many years, the only land link between the republic and Malaysia - traffic was said to be normal.

The historical baggage of Singapore's 1965 separation from Malaysia would go on to colour some aspects of bilateral relations during his administration.

A case in point was the "points of agreement" (POA) on Malayan Railway Land in Singapore that was signed on Nov 27, 1990, a day before Lee stepped down as prime minister.

The POA between the countries went unimplemented for 20 years until 2010 when a deal was announced by Prime Minister Najib Tun Razak and his Singapore counterpart Hsien Loong, with the POA having "enhanced features".

"He (Lee) conducted relations with four prime ministers on the Malaysian side and lived to deal with all six of them," wrote retired senior Wisma Putra diplomat Tan Sri Kadir Mohamad in his book "Malaysia-Singapore Fifty Years of Contentions."

Kadir wrote in his book that for a long time after his retirement, "Lee Kuan Yew alone prescribed Singapore's policies towards Malaysia."

His last visit to Malaysia was in 2009, when he spent eight days touring a number of states and met with Malaysian leaders, businessmen and opinion leaders in what was described as a trip down memory lane.