Let's get our bearings right in Malaysia 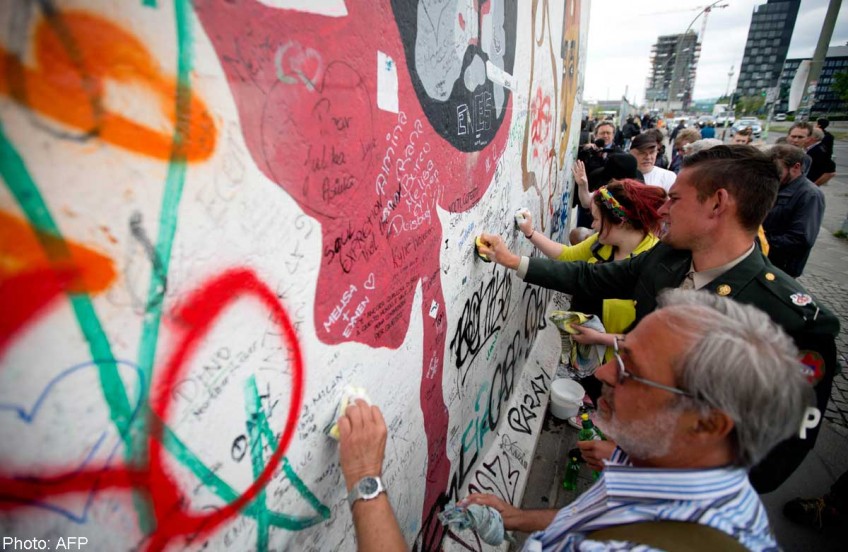 Tourists and pedestrians clean a painting at the East side gallery from tags and scribblings in Berlin, on April 27, 2014.

Our Prime Minister said to learn from German unity and we can start by understanding why there should be no misconception about an East or West Malaysia.

Two weeks ago, I visited the Berlin Wall, the most important symbol of the standoff between Western democracy and Eastern communism during the Cold War.

The wall, initially a barbed wire fence built within one night on Aug 13, 1961, encircled West Berlin which was located in what was East Germany.

Over the years, it grew into an elaborate system of concrete double barriers, sand-filled dead zones, electric fences and watch towers. All to stop desperate East Germans from crossing over to prosperous, free West Germany.

Come November, it will be 25 years since the fall of the Berlin Wall on Nov 9, 1989, which led to German reunification.

How many young Malaysians now know there was once an East and West Germany? Or, for that matter, that there was once a West and East Pakistan created at the time of partition with India in 1947.

West and East Pakistan had little in common except for religion, and power was concentrated in West Pakistan which was perceived to be exploiting its eastern namesake.

After fighting a brutal war of liberation, East Pakistan became Bangladesh in 1971.

As history has shown, countries with compass point prefixes to their names do not make happy nations; uncannily so for those with the prefix "East". And let's not forget the perennial tension between North and South Korea.

Which brings me to our own country: like the old East and West Pakistan, we are geographically divided and because of that, it is the norm for many to say West Malaysia and East Malaysia.

This is so wrong because there is no West and East Malaysia. To say and think this is to create the impression there are two countries. The right and proper terms are Peninsular Malaysia and Sabah and Sarawak.

This West-East reference is very much a peninsula habit as those in Sabah and Sarawak commonly refer to the peninsula side as Semenanjung. And if we are honest about it, for a long time, we on the peninsula were rather insensitive and indifferent to the goings-on across the sea.

We knew little about the history and cultures of the peoples in those states. In fact, that was how we thought of them; just two of 14 states that make up the nation.

We preferred to celebrate Merdeka Day on Aug 31 and not Malaysia Day on Sept 16.

It was only in recent times that national leaders took pains to praise Sarawak's racial harmony, holding it up as a model for 1Malaysia, and declaring Sept 16 a national holiday.

Despite that, all is not well. Political leaders from Sarawak have been openly expressing their deep disquiet over certain actions and decisions made in Semenanjung of late.

The strongest voice among them is newly appointed Chief Minister Tan Sri Adenan Satem, who has an issue with the way Sarawak is treated - as if it is just one of the 14 states. He pointedly said: "The relationship between Sarawak and KL is different from that between Pahang, for instance, and KL."

To him, history has been forgotten because Sarawak (and Sabah) did not "join" Malaysia but helped create Malaysia.

"There was no Malaysia to join before the signing of the Malaysia Agreement. We are equal partners in the federation," he said in an exclusive interview with The Star after taking office in March.

This is clearly an important issue with Adenan as he took pains to reiterate the same point in his winding-up speech in the state assembly in May.

Tellingly, he also said: "For this very reason, we have and will continue to safeguard our rights and autonomy. I will also not compromise on issues that can disrupt the racial and religious harmony of our people. I wish to make it clear that hudud will not be implemented in Sarawak and we should stop harping on the matter now."

He added that his government would not allow any Bible to be confiscated in the state.

Sarawak's strong and clear stand on such matters has also caught on with Sabah politicians who seem to be thinking along the same lines.

We should be grateful that Sarawak and Sabah leaders who want to keep our bearings right are loudly reminding everyone of the spirit and basis for the creation of a secular Malaysia. And that they are taking to task those who play the racial and religious card to please one segment of voters to the detriment of the rest.

My visit to the Berlin Wall memorial impressed upon me how precious and powerful national unity is. Germany was divided by the opposing great powers of the last century. But once reunited, a one Germany went on to become the economic powerhouse it is today. Its political influence is growing too. And, as Prime Minister Datuk Seri Najib Tun Razak noted, it was unity that helped them win the World Cup.

East Pakistan, on the other hand, after decades of being bullied and exploited by West Pakistan, decided enough was enough and fought to create a new independent state and went on its own way.

I think it's clear which history lesson is a lot more attractive to us. We ordinary citizens must stop the East and West Malaysia thinking.

More importantly, we must not be thrown off course by politicians and racial and religious bigots who insist on treating our nation as if there were two disparate parts, seem hell-bent on building walls to divide us and don't give a toss about national unity and harmony.

It's time we tell these people who don't like our multi-racial, multi-religious Malaysia, they can leave and go somewhere else ... like Sudan or Yemen.