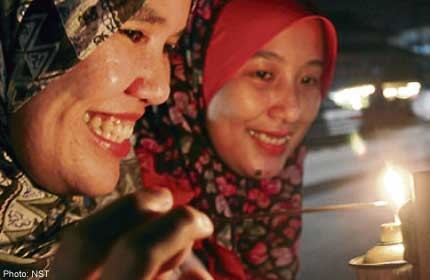 KUCHING - It all started because the village was dark. Second White Rajah Charles Brooke, who had a close kinship with Malays, always took a ride in his carriage to witness the merriment of the final week of Ramadan.

"The elders said the Rajah would ride around in his carriage during Sungkei (breaking of fast). But the village was so dark, he told the village heads to put up lit oil lamps to make it bright and lively. And we have been doing so till today," said Kampung Bintangor village head, Iskandar Landau.

Kampung Bintangor or Kampung Masjid as it was called then, is one of the 13 villages situated along the river near Satok.

The practice of putting up oil lamps here is known as bertuntong, a local word for oil lamps, where all houses in the village are decorated and roads are framed by illuminated arches.

"It was a sight to remember. The whole village was bright then. Everyone would be outside his home. It really felt like a festival," said 64-year-old Iskandar.

The final week of Ramadan, or Malam Tujuh Likor, is an experience enjoyed by locals and tourist years ago, but now, as kerosene is hardly available these days, all that is gone.

"The collaboration between the different villages is no more and the team spirit that used to be there has disappeared. The houses are decorated with colourful electric lights today," said Iskandar.

He also said the Malam Tujuh Likor was no longer in keeping with its name, as today more people were putting up the lights a few days before the celebration.

The National Arts and Culture Department wants to rejuvenate the dying tradition by organising the event at the village.

State director Salehhuddin Md Salleh said Pesta Bertuntong has a huge tourism potential waiting to be tapped as it reflects the uniqueness of the local Sarawak Malay culture.

The department also plans to make it one of the attraction for Visit Malaysia Year 2014.