Main suspects: The married couple being brought to the magistrate’s court in Langkawi, Kedah.

LANGKAWI - The fate of the three-year-old whose remains were found in the jungle a few days ago was sealed when her mother decided to move in with her lover and his wife.

The man had kept his affair a secret from his wife - a government hospital nurse.

He had told his wife that he had brought the single mother into their household to serve as their maid.

OCPD Supt Mohd Iqbal Ibrahim said initial investigations revealed that the mother - an Indonesian - had known the man for only about a month when he frequented the eatery where she was working at in Penang.

Police are unsure of her motive but Supt Mohd Iqbal said in end-November, the 31-year-old mother decided to follow him and move into his home with her daughter Nur Aisyah Aleya Abdullah in tow. 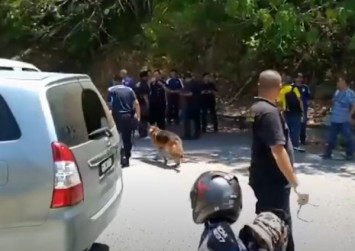 He said the pair managed to keep their affair a secret for two months until end-January when the wife discovered that her husband was having intimate relations with the single mother.

A heated quarrel ensued and the mother was chased out of the house and ended up staying in the restaurant in Padang Matsirat where she found work.

But Supt Mohd Iqbal said Nur Aisyah Aleya was not kicked out and continued living with the married couple, who were childless.

"In end-February, the single mother went to their house and found that her daughter was no longer with them.

"They told her Nur Aisyah Aleya was given to someone else to care for," he told reporters yesterday.

The mother lodged a report on March 3.

"When we went to investigate, we found that the married couple had left Langkawi and we quickly create a Nur Alert," said Supt Mohd Iqbal.

Nur Alert is Malaysia's national bulletin when a child is missing.

Posters of the missing child are spread on social media and placed in all government agencies and even banks.

Police traced the couple and on Tuesday found them at a homestay in Ampang, Kuala Lumpur.

After questioning them, the man led investigators back to Langkawi and they found the remains of the girl in a ravine in Gunung Raya.

"Her body was put in a suitcase and thrown into the ravine.

"We believe she died in mid-February and by the time we found her, all that was left was her skull and bits of hair.

"The suspects claimed the girl had a seizure in their home while they were having an argument," said Supt Mohd Iqbal.

The man and his wife were remanded for seven days yesterday in a magistrate's court here and the case is being investigated for murder.