PETALING JAYA - Tun Dr Mahathir Mohamad and four other Parti Pribumi Bersatu Malaysia Members of Parliament have lost their party memberships following their move to join the Opposition bench during the Dewan Rakyat meeting on May 18.

“You have informed that your seating in Parliament would be with the bloc that does not support Perikatan, which is led by Prime Minister Tan Sri Muhyiddin Yassin who is also the Bersatu chairman.

“In the Parliament sitting on May 18, you joined and sat with the Opposition. It is therefore in accordance to 10.2.2 and 10.2.3 of the party constitution, your membership in Bersatu is terminated automatically, ” said Shuhaimi in the letter to Dr Mahathir. The other four received similarly worded letters.

Read Also
Sack me according to party constitution, says Mahathir 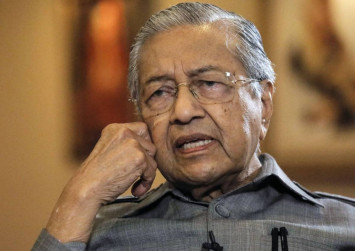 As of press time, Dr Mahathir’s office stated that they have yet to receive the said letter in hand although the letters were widely circulated on social media.

Speculation on Dr Mahathir’s sacking has been rife in recent days as the first Bersatu party polls loom.

On May 18, Dr Mahathir had led the four MPs to sit with the Opposition bloc, as opposed to with Perikatan MPs, in protest of Bersatu having joined hands with former rival MPs to form the Perikatan government.

Muhyiddin and Dr Mahathir had fallen out after the former succeeded him as the eighth Prime Minister when the latter resigned as the seventh prime minister.

The Pakatan Harapan government collapsed on Feb 24, leading to the formation of Perikatan when Bersatu joined hands with Barisan Nasional, PAS and former Barisan coalition partners.

Dr Mahathir and his followers, however, insisted he was still the chairman and Bersatu was still with Pakatan, despite the majority of Bersatu MPs having followed Muhyiddin.

Former Bersatu secretary-general Datuk Marzuki Yahya, meanwhile, claimed that the party’s move against Dr Mahathir and the four was invalid, as the termination of a party membership has to go through the disciplinary committee and supreme council first.

“It is not valid in the party constitution. It is supposed to go through the disciplinary committee and supreme council first, not just a letter from the organising secretary, ” he said. Marzuki also accused Suhaimi of abusing his powers.

However, Marzuki, an outspoken Dr Mahathir supporter, did not receive the termination letter.

Meanwhile, Bersatu supreme council member Wan Saiful Wan Jan said a member automatically terminated his membership and need not be sacked to lose his membership when he knowingly went against the party constitution.

“When one knows the party constitution, as Dr Mahathir and the four do, and they knew that their membership would be terminated if they sat with the Opposition in Parliament, then their actions in doing so would terminate their membership automatically and the party need not sack them.

“They were not sacked but they exited the party due to their own actions, ” said Wan Saiful.

Later at night, Maszlee tweeted: “We don’t surrender, we win, or we die”, with a picture of the 19th century national hero of Libya, Omar Mokhtar, who is a symbol of resistance in the Arab world.