In a letter to the ROS, the former prime minister stated that the ROS might not have taken into account several factors over his “resignation” and Tan Sri Muhyiddin Yassin’s appointment as the acting chairperson.

Dr Mahathir also wants the ROS to probe and resolve the termination of Datuk Marzuki Yahya as the party secretary-general and Datuk Seri Hamzah Zainuddin’s appointment as his replacement, which was allegedly made “without consultation with the Bersatu chairperson”.

In a letter dated May 5, ROS stated that Dr Mahathir’s resignation was effective that day itself and that the position would be held by party president Muhyiddin until the next Bersatu election.

When contacted, Haniff Khatri confirmed that he submitted the letter yesterday to ROS at about 3.30pm.

He said his client had directed him to inform the ROS that various events had taken place since the issuance of his resignation letter.

That letter, he said, was even rejected and objected to by the party.

“Therefore, my client remains as the Bersatu chairman,” added Haniff.

According to Dr Mahathir, Muhyiddin’s presence at a media conference on the eve of the May 18 Dewan Rakyat sitting was done in his capacity as party president, not as acting chairman, adding that it was to include a memorandum of understanding with six other political parties to set up Perikatan Nasional.

Haniff Khatri said that therefore, because of the incident, “it was clear that there was no acceptance in the resignation or a refusal to the facts on our client’s resignation as the Bersatu chairman”. 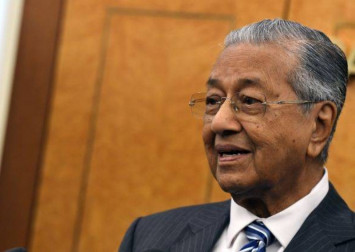 He also pointed out that the party’s election committee chairman had announced on April 1 that Dr Mahathir won the chairman’s post unopposed.

“The party president also did not nominate himself to contest as the chairman as he only contested as the president, which was challenged by his deputy Datuk Seri Mukhriz Mahathir, ” the letter stated.

As such, Haniff Khatri said Dr Mahathir was disputing the May 5 ROS letter, adding that ROS should have considered all facts before issuing any statements.

Haniff Khatri had also asked for the registrar to respond to his letter within seven days.

Dr Mahathir unexpectedly resigned as Bersatu chairman hours after stepping down as prime minister on Feb 24.

A day after, Muhyiddin announced that the party had quit Pakatan Harapan, causing the coalition to be toppled as the government.