Mahathir: People pushing for Najib arrest, but it's not so easy

TOKYO - Prime Minister Tun Dr Mahathir Mohamad said while many people were asking for the arrest of the former premier, it was not so easy.

"People are waiting - when are we going to arrest (Datuk Seri) Najib Tun Razak?

"It's not so easy. We have to find evidence that will stand up in court.

"If the evidence is not strong and he is not found guilty by the court, then all the things we have done and said will be questioned by the people," he said in his speech during the dinner with some 250 Malaysians in Japan here on Sunday (June 10) night.

He said with the right evidence, "hopefully", Najib would be found guilty by the court. 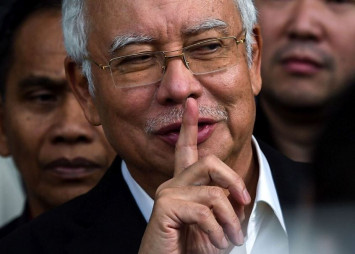 "I say hopefully because the people's choice must be respected and we want to be a democratic country," he said, adding that the new Pakatan Harapan government would not run roughshod over the other branches of the government such as the judiciary.

"That's a relief for Najib," Dr Mahathir said, adding that Najib was however not allowed to leave the country.

He said however that many people had 'disappeared' lately, including Jamal Yunos.

"But we hope that before they disappear, we can punish them accordingly to the law," he said.

He also said because Najib was using stolen money to pay 'everyone', this was not sustainable, adding that some people would suffer because of the restructuring and rehabilitation of the country's RM1tril debt was not easy.