Reuters and The Star/Asia News Network

PUTRAJAYA - Malaysia's Attorney-General (A-G) Mohamed Apandi Ali has been told to take a leave of absence and will be temporarily replaced by the Solicitor-General, said Prime Minister Mahathir Mohamad on Monday (May 14).

Tun Dr Mahathir said although the Attorney-General's contract had been recently renewed, the government would go through the proper process to initiate investigations against Tan Sri Apandi.

"While he is on leave, the Solicitor-General will take over his work and will carry on his job," he told a press conference.

Asked whether Mohamed Apandi was being investigated, the Prime Minister said a police report must first be lodged before an investigation can be done.

"We need a basis for an investigation. At this moment, we have yet to lodge a formal report, although there are a lot of allegations made against Apandi," said Dr Mahathir.

"We need a report and based on that, we will carry out a full investigation," he said.

"When the investigation is carried out, action can be taken, including to suspend the A-G or other action, including barring him from travelling outside the country," he added.

Apandi had reported to work on Monday, the first working day since Dr Mahathir's Pakatan Harapan alliance won the May 9 polls.

Dr Mahathir had previously said that the A-G had "undermined his own credibility" and indicated that several government servants would be investigated for their roles in the aborted investigations into the 1Malaysia Development Berhad (1MDB) state fund financial scandal. 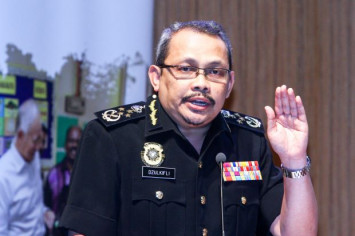 The government, he said, was generally aware of the whereabouts of 1MDB-linked financier Jho Low.

Dr Mahathir, 92, said that he would also appoint a new chief of the country's anti-graft agency and that all alleged crimes committed by previous government would be investigated.

All government ministries had been instructed that no documents could be taken out or destroyed, he added.