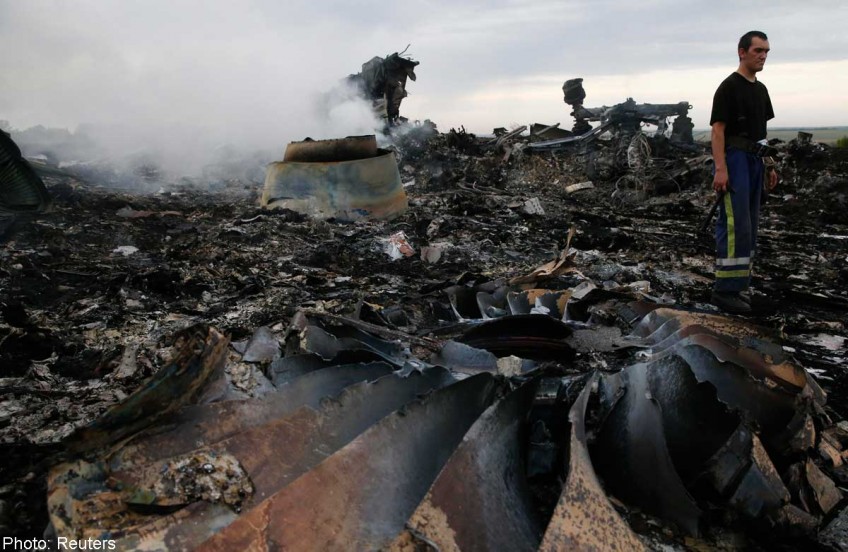 An Emergencies Ministry member walks at the site of a Malaysia Airlines Boeing 777 plane crash near the settlement of Grabovo in the Donetsk region, July 17, 2014.

NEW YORK - Insurance on the Malaysian airliner brought down over Ukraine is likely to pay out relatively quickly if the cause of the crash is determined, but observers say insurance for the loss of 298 lives and other liability could be complex and lengthy.

Malaysia Airlines said flight MH-17 disappeared at 1415 GMT as it flew over eastern Ukraine toward the Russian border, bound for Asia. Flight tracking data indicated it was cruising at 33,000 feet when it lost contact with air traffic controllers, apparently struck by a missile.

It should be fairly easy for investigators to determine whether the plane was hit by a missile or blew up for some other reason, said Robert Cohn, an aviation attorney and partner at Hogan Lovells in Washington, D.C.

"Then the interesting issue is who do you go after as the malefactors?" he said. "Are you going to sue a rebel?" Ukraine accused "terrorists" - militants fighting to unite eastern Ukraine with Russia - of shooting down the Boeing 777 with a Soviet-era SA-11 ground-to-air missile as it flew from Amsterdam to Kuala Lumpur.

Leaders of the pro-Russian Donetsk People's Republic rebels denied any involvement, although around the same time their military commander said his forces had downed a much smaller Ukrainian transport plane.

In some ways, the investigation will mirror the search for the Malaysia Airlines flight that went missing in March, when Malaysia had jurisdiction and other countries assisted.

The US National Transportation Safety Board, which often investigates air accidents overseas and must be invited to join, said it was still determining its possible involvement in probing the Ukraine loss. "We are communicating with other government agencies and evaluating what our role will be," the agency said in a statement.

US and European air regulators warned in April that airlines should avoid flying over the Crimean Peninsula and parts of Ukraine.

However, some airlines were routinely flying over the northern part of Ukraine, said Mark Duell, vice president of operations at FlightAware.com, a flight-tracking website.

Lufthansa AG, Air India and Malaysia Airlines are among the airlines that have flown there, according to FlightAware's data. "It doesn't seem anyone's been avoiding Ukraine," Duell said. "I don't see airlines going over Crimea, but I don't see anyone avoiding the rest of Ukraine." However some international airlines, including Australia's Qantas Airways and Korea's two major carriers, said Friday they had already shifted routes to avoid Ukrainian air space due to the conflict between Kiev and pro-Moscow rebels.

Cohn said he expected regulators to issue broader warnings about Ukraine airspace, and that airlines would be more cautious in the area even if regulators did not expand such warnings.

On Thursday, the Federal Aviation Administration said US airlines "have voluntarily agreed not to operate in the airspace near the Russian-Ukraine border." "The FAA is monitoring the situation to determine whether further guidance is necessary," the agency said.

Several airlines, including Turkish Airlines, have since announced they would avoid Ukrainian airspace.