She said initially wanted to write a football-themed Hari Raya song, but later dropped the idea and focused on the sport itself.

She performed the song with her two children, Cik B and Kacak, as well as singer Mimi Fly during the launch at Movie Animation Parks Studio (MAPS) here on Friday (June 22).

The song was co-written and produced together with songwriter Cat Farish and took three days.

Hasmiza said she was fully involved in the making of the video.

"Not only did I direct the video, I also choreographed all the dance moves, which was hard.

"I was also involved with the editing process and I would redo a scene if I found that the video was not as upbeat as the song," she said adding it took less than RM100,000 to make the video. 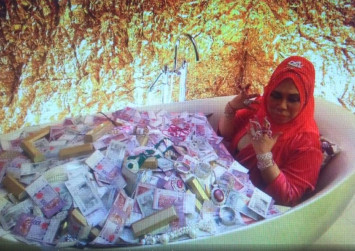 Cat said the songwriting and producing took only three days as Hasmiza already had the structure, element and lyrics.

"She wanted a song that was simple yet catchy.

"Working with her was not easy. She was very particular with what she wanted but at the end, it was worth it," he added.