PETALING JAYA  - He had moved to Kuala Lumpur more than 15 years ago, but Low Tong Seng (pic) still maintains his old Negri Sembilan address in his MyKad.

The reason for not changing his address, said the 34-year-old, was because he wanted to continue voting in his hometown, Gemas, as everyone there knew he is of Chinese-Indian parentage.

“I am afraid to vote in Kuala Lumpur because I may be mistaken for a foreigner and given a sound trouncing, just like the bad experience encountered by a few Malaysians in the last general election,” said Low.

He said those volunteering at the polling centres in Gemas knew his late mother, who was an MIC branch leader and a Tampin district councillor, and so it was safe for him to vote there. 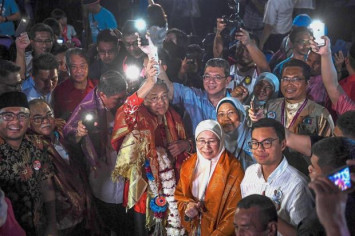 “I think it’s my dusky complexion and features which are neither Chinese nor Indian.

“Even my friends tell me I look like a Bangladeshi,” said Low.

According to him, besides being a painful experience, it would also be humiliating if he was singled out by vigilantes and accused of being a foreigner trying to vote.

“If such a thing did happen, I am sure the incident will be widely reported in the media.

“My photo, with allegations of being a foreigner with a fake MyKad, will be circulated via social media and WhatsApp until the next general election five years later.

“Even the thought of that happening makes me very scared,” said Low.

He said several news articles, during the 2013 election about dusky looking men with Chinese names being beaten up because they were mistaken for foreigners, was enough to spook him.

During the last election, voters such Pang Chee Pin from Segamat, Johor, and Chua Lai Fatt from Klang, Selangor, were roughed up by Opposition supporters because they did not look Chinese.

Pang is an Indian who was adopted and raised as a Chinese since birth whilst Chua is of Chinese-Indian parentage.

Opposition political supporters apprehended both men at polling centres, where they had gone to vote, on suspicion of being Bangladeshis with fake MyKads.

One of the Opposition politicians who accused Chua of being a foreigner was Serdang MP Ong Kian Ming.

When Ong, a DAP election strategist, ­realised his mistake, he met Chua and his family to apologise for the misunderstanding.

A screenshot of Pang’s MyKad, with the allegation that he is a Bangladeshi, is still making its rounds on WhatsApp.