Malaysia election: Second person collapses and dies while waiting in line to vote

Voters queue up to cast their ballots at a polling station during the 14th general election in Alor Setar on May 9, 2018.

KUALA TERENGGANU - A woman collapsed and died while waiting in line to cast her vote in Dungun.

Rokiah Sulong, 54, had arrived at SMK Pulau Serai to cast her ballot at around 8.20am on Wednesday with her eldest daughter.

She was waiting in line when she suddenly collapsed and is believed to have died at around 9.05am. Rokiah's 36-year-old daughter Nur Zita Md Nor said she and her mother were in different queues when they got to the polling centre. 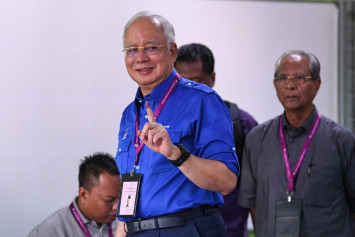 "Someone shouted that a person had fainted and told me it was my mother.

"She was semi-conscious but lost consciousness a little later and would not respond to my calls," she said.

It is learned that Rokiah had a history of high blood pressure.

She was one of two such casualties on polling day.

In Petaling Jaya, a senior citizen who was waiting in line to cast his vote collapsed and died as well.

Lor Voon Chor, aged 78, was at the SMK (P) Taman Petaling polling station before he fainted at around 9.30am.

A medical officer at the scene pronounced the man dead at 9.45am. His family said he suffered from heart and lung issues, as well as diabetes.