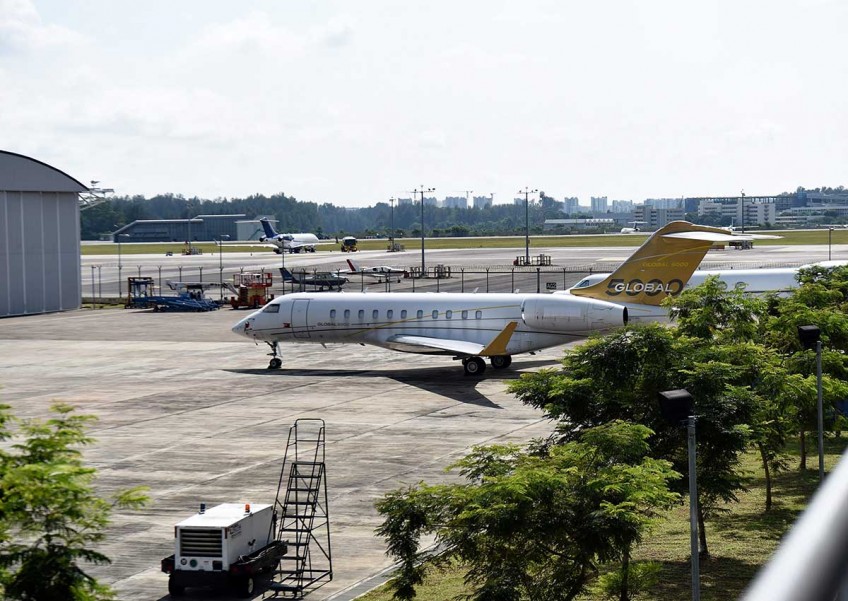 No plane sailing: The Bombardier Global 5000 jet parked on the tarmac of Seletar airport in Singapore.
AFP

PETALING JAYA - Malaysia will have to cough up at least RM3.5 million (S$1.1 million) to bring the Global 5000 private jet that belongs to fugitive Low Taek Jho, better known as Jho Low, back to Malaysia.

The luxury private jet, which was impounded by the Singapore authorities since February last year, is currently parked at the Singapore Seletar airport.

"However, before the plane is allowed to be flown to Malaysia, Seletar airport has asked for settlement of the parking charges first," said a source.

The source said the parking charges over the last 18 months have escalated to about RM3 million (S$1 million).

It is learnt that Seletar airport had indicated the fee to the Singapore authorities following Malaysia's keen interest in taking possession of the plane.

Changi Airport Group declined to comment on the parking charges.

"Due to client privacy, we will not be able to share the information," its spokesman told The Star.

The source said the Malaysian government would have to pay the fee before the airport authority allows the plane to leave its tarmac.

It is understood that negotiations on the parking charges have been held between the Malaysia and Singapore authorities and the airport operator.

But to date, the source said, they have yet to reach a conclusion on the payment.

"The Malaysian government would also have to fork out another RM500,000 to service the aircraft, which has been grounded and left under the sun at the airport apron," said the source.

The source said the aircraft that has been grounded since February last year is currently undergoing service maintenance work to ensure its airworthiness before it is allowed to be flown to Malaysia.

"The maintenance work on the airport craft is almost completed," said the source.

The plane is likely to be taken to Subang Airport, a facility mainly used by private planes, said the source.

The Global 5000 jet was listed by the US Department of Justice (DoJ) as one of the assets bought using Malaysia's state-owned 1MDB laundered money, through a series of shell companies and bank accounts.

The plane, registered in the US as N689WM/MSN 9265, is registered to a company called Wynton Aviation and placed as a trust with Wells Fargo Bank Northwest.

Wynton Aviation is a company that was registered in the British Virgin Isles in 2009. The DoJ stated that Wells Fargo's records indicate that it is a holding company owned by Low.

It was learned that prior to the plane being seized, the jet was based at Teterboro Airport New Jersey, close to Jho Low's New York home.

Airliners.net website showed the plane had flown to Paris, Geneva, Beijing and London among other countries between 2009 and 2017.

Prime Minister Tun Dr Mahathir Mohamad had on Aug 13 said Malaysia was keen to take possession of the aircraft.

Early in the month, Malaysia also took possession of the superyacht Equanimity from the Indonesian authorities.

The vessel, valued at US$250mil (RM1bil), was handed over to Malaysian authorities near Indonesia's Batam island on Aug 6.

It has since been brought back to the Boustead Cruise Centre in Pulau Indah.

Equanimity, which according to DoJ belongs to Jho Low and purchased with funds diverted from 1MDB, was seized by the Indonesian authorities in Tanjung Benoa port, Bali, in February.

The yacht, which is 54th in luxury vessels of its class in the world, was seized at the request of US authorities as part of its initiative to recover the billions diverted from 1MDB.

Another source said due to the high maintenance of the superyacht and its crew, the Indonesian government had decided to turn over the vessel to Malaysia at the request of Dr Mahathir when he visited Jakarta in June.