The corruption trials of erstwhile power couple Najib Razak - the former prime minister of Malaysia - and his wife Rosmah Mansor have turned up new revelations about alleged bribes, expedited government tenders and gifts of luxury watches.

In Rosmah's trial, two witnesses so far have claimed the self-styled former "First Lady of Malaysia" had pushed to expedite the solar energy project related to the bribes she is charged with receiving, in line with the prosecution's continued bid to paint her as holding undue sway over matters of governance.

Former education secretary general Madinah Mohamed on Thursday told the court Rosmah had ordered her to "look into the project a bit" and "speed it up a little".

Mahdzir Khalid - who served as education minister in Najib's Barisan Nasional administration - had previously told the court he had been pressured by Rosmah into approving a firm called Jepak Holdings as the contractor for a solar hybrid project involving more than 350 rural schools in the state of Sarawak, although he said he had his doubts about the company's ability to carry out the job.

Rosmah stands accused of three counts of dishonestly soliciting 194 million ringgit (S$65 million) in bribes connected to contracts for the project, as well as 12 charges of money laundering and five counts of failure to declare income to the country's tax authorities, bringing the total number of charges against her to 20.

Her trial, now in its sixth day, got off to a rocky start last week when Rosmah submitted a doctor's letter claiming she was too ill to present herself to court. After a brief hospitalisation, she showed up for her trial with an ambulance in tow.

Proceedings were adjourned early yesterday after Rosmah refused to leave the courtroom at lunchtime, claiming she felt unwell.

In a neighbouring courtroom, her husband Najib Razak is facing over 40 corruption charges linked to the 1Malaysia Development Berhad (1MDB) financial scandal, which saw billions siphoned out of the sovereign wealth fund and used to buy purchase luxury property, classical artwork, and throw parties with celebrities.

Illness has been a hallmark of the widely observed trials, with Najib last year presenting medical certificates to court, citing bouts of conjunctivitis in August, September and October.

The disgraced former premier's trial this week saw former foreign affairs minister Anifah Aman tell the court it was not proper that "donations" from Saudi Arabia's then ruler King Abdullah bin Abdul Aziz al-Saud had been used by Najib to purchase a Chanel watch worth 500,000 ringgit for Rosmah.

Najib had previously testified that the watch was a gift to appease his wife after a family holiday to Hawaii was cut short.

Anifah also said the then Saudi king had wanted to gift Najib with an Arabian stallion a decade ago, though Najib declined saying he did not ride horses. 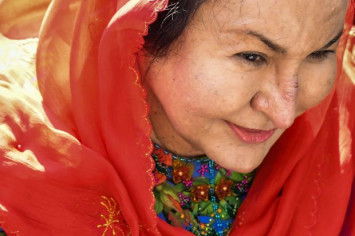 Najib and Rosmah fell from grace after shock election results in May 2018 saw his ruling Barisan Nasional coalition ousted by the current Pakatan Harapan administration. Soon after the new government was formed, Najib made an attempt to flee the country but was stopped at the airport.

During subsequent raids on his and Rosmah's homes, police confiscated about US$275 million (S$380 million) worth of goods including 284 boxes of designer handbags, 2,200 rings, 1,400 necklaces, 14 tiaras, 423 watches, and 234 pairs of designer sunglasses.

The seized items were seen by many as a vulgar symbol of the former government's detachment from grass roots issues and in stark contrast to the economic woes and discontent faced by ordinary Malaysians.

Rumours of profligate spending and her supposed control over her husband have tarnished Rosmah's reputation in the eyes of the Malaysian public, negative impressions further bolstered after anti-corruption authorities last month released recordings of phone calls they say took place between her and Najib in which she was heard to be "scolding" him.