PUTRAJAYA - Malaysian Prime Minister Mahathir Mohamad says he is "puzzled" why Tunku Ismail Sultan Ibrahim, the Crown Prince of Johor, is unaware of the ship-to-ship hub to be built in waters off Johor Baru.

Tun Dr Mahathir said many people in the state already know of the project, which has been discussed since last year.

He was responding to questions on the project after witnessing the signing of an agreement between KA Petra Sdn Bhd and Hutchison Port Holdings Ltd.

Read Also
Dr Mahathir: Loyalty to country should be above everything else 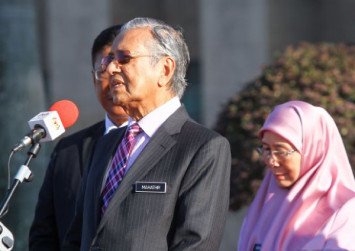 "I met him yesterday (April 1) and we spoke about this. So he knows," he said, adding that the project would be beneficial to the country.

On Sunday (March 31), Tunku Ismail shared a Facebook post by a Johor organisation called Gerakan Muafakat Johor (Johor Consensus Movement) which accused Putrajaya of bulldozing the project through without the knowledge of the Johor government.