JOHOR BARU - Police believe black magic factored in the removal of the string tied to the shroud of a man buried in a Muslim grave.

The grave in Gelang Patah was dug to a depth where the body could be reached through a hand-sized hole and the string removed.

ACP Dzulkhairi said a 58-year-old man who died in a road accident last year was buried in the grave.

"We believe it is related to black magic and more than one person was involved. 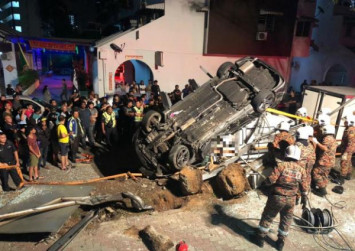 "We also believe the persons who did it didn't know whose body was in the grave.

"It became the target because it was still new," he said yesterday.

On another matter, ACP Dzulkhairi said police destroyed gambling machines worth more than RM750,000 that were seized between 2011 and 2018.

Among the items were computer monitors, CPUs, laptops and tablets.

He added the fraudsters would call up the victims pretending to be a friend who was in trouble.

"They usually use text messages, phone calls, and even WhatsApp from an unknown number and those who are naive, will easily fell for it and transfer their money to these unknown individuals.

"They will only know that they have been duped once they call their real friend," he said.