KUALA LUMPUR - A PKR state assemblyman has been summoned by Bukit Aman to have his statement recorded in connection with the sex video implicating Economic Affairs Minister Datuk Seri Azmin Ali.

"I confirm that the assemblyman arrived (at Bukit Aman) at 10am and we completed recording his statement at 11.30am.

"He is assisting police in the investigation," he said when contacted yesterday.

On a suspect who was arrested in Shah Alam on Friday, Comm Huzir said his remand has been extended until Wednesday.

Last week, Inspector-General of Police Datuk Seri Abdul Hamid Bador had said the police are exploring all angles, including the possible connection of the five other men, Haziq Abdullah Abdul Aziz and a state assemblyman. 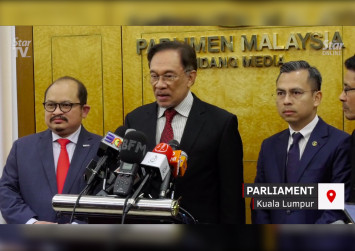 "It is an offence if someone spreads such videos on various platforms, especially on social media," he said last Tuesday.

"We will identify those involved and action will be taken," he told reporters.

"We have sent the investigation papers a few times to the Attorney General's Chambers but they have sent them back with instructions to investigate further and collect more evidence.

"This is a very complicated case as it involves politicians and others, so allow us time to properly investigate it.

"We are being careful while being transparent and adhering strictly to the standard operating procedures," the IGP said.

So far, 11 people have been detained in connection with the case.

Those who have been detained included Haziq Abdullah and Farhash Wafa Salvador Rizal Mubarak.