Malaysia to seek justice for MH17

A family member reacts during a commemoration ceremony in memory of the victims of the Malaysia Airlines flight MH17 plane crash on the fifth anniversary of the accident, at the Australian High Commission in Kuala Lumpur, Malaysia, July 17, 2019

Prime Minister Tun Dr Mahathir Mohamad is dismayed that perpetrators behind Malaysian Airlines Flight MH17's downing have not been found after five years.

On July 17, 2014, the aircraft with 298 onboard from Amsterdam en route to Kuala Lumpur was shot down over Donetsk, Ukraine.

An international joint investigation team (JIT) led by the Dutch concluded that MH17 was downed by a BUK anti-aircraft missile fired by pro-Russian separatists in their conflict against Ukraine.

"We are sad as it was done on purpose, but we don't know who launched the rocket," said Dr Maha­thir after launching the Be­yond Paradigm Summit organised by Serba Dinamik Holdings at a trade exhibition centre here yesterday.

In a statement yesterday, the Transport Ministry said that Malay­sia would continue to pursue justice for the MH17 victims to ensure per­petrators were held accountable.

The aircraft, a Boeing 777-200ER piloted by an all-Malaysian crew, flew over Ukraine in daylight when it was shot down.

Over two-thirds of the passengers were Dutch, the rest being mainly Malaysians and Australians, as well as citizens of seven other nations.

"Five years might have passed but our resolve for accountability and justice will not wane.

"The Malaysian government will continue to pursue those who were responsible for this heinous crime and secure justice for the victims," said the statement, which added that Malaysia would continue to work with the other members of the JIT, other grieving nations and the international community in informing the families of the progress being made.

"We sincerely hope that this will bring some measure of comfort and solace to the families and the next of kin of those who were lost in this tragedy.

"We hope and pray that the families and loved ones of those on board will be given strength to resume normal lives, or as normal a life as may be possible.

"We will remain resolute in our pursuit, and we will leave no stone unturned until justice is served," said the statement. 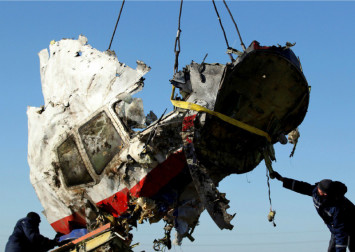 In June, the JIT, consisting of Australia, Belgium, Malaysia, the Netherlands and Ukraine, had announced that four individuals - three Russians and one Ukrainian - would be charged with the downing of MH17.

On June 19, the Dutch Public Prosecution Service charged them with murder in connection with the downing of the aircraft.

International arrest warrants were issued for the accused, expected to be tried in absentia on March 9, 2020 in the District Court of The Hague.

But on June 20, Dr Mahathir said the decision to charge the four was a political plot against Russia.

He said Malaysia was not con­vinced of JIT's findings, and demanded that the investigators provide proof that the Russians were behind the shooting.

"Today remains a very sad day for the loved ones of MH17 victims, and I continue to share their feelings," said Liow, who was transport minister when the tragedy took place.