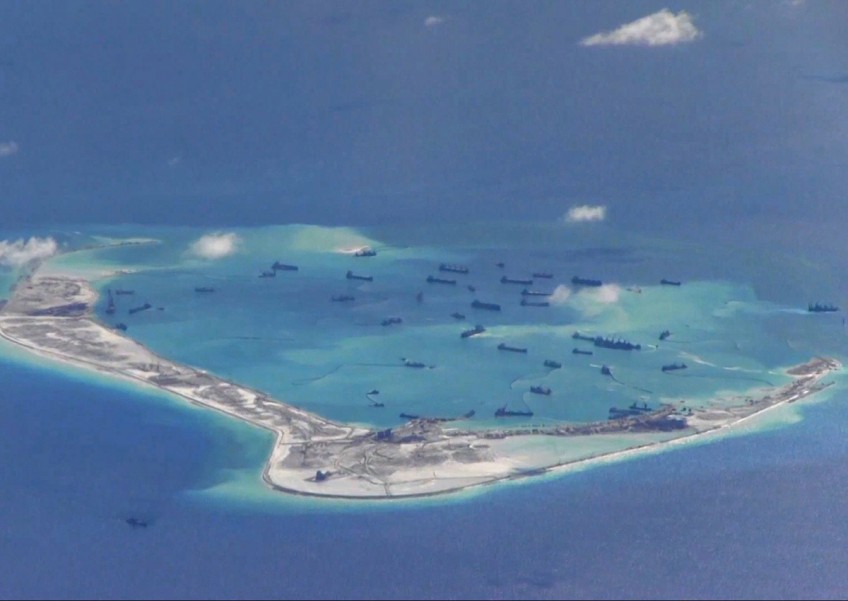 Chinese dredging vessels are purportedly seen in the waters around Mischief Reef in the disputed Spratly Islands in the South China Sea in this still image from video taken by a P-8A Poseidon surveillance aircraft provided by the United States Navy in this May 21, 2015 file photo.
Reuters

BEIJING - China's construction work on islands in the disputed South China Sea is "unwarranted provocation", Malaysia's armed forces chief said on Sunday, in a rare public comment about the spat from a country which has its own claims in the seas.

China's relations with several Southeast Asian countries, especially the Philippines and Vietnam who have competing claims in the South China Sea, have been strained by Beijing's increasingly assertive tone in an area through which US$5 trillion (S$6.9 trillion) in ship-borne trade passes annually.

Beijing's move last year to step up the creation of artificial islands, which it says are mostly for civilian purposes, has also drawn strong criticism from Washington.

"I would like to address the issue of the unwarranted provocation by the Chinese over the construction on the garrisoned islands of the South China Sea," Malaysia Armed Forces chief Zulkefli Mohd Zin told a security forum in Beijing.

China has offered assurances that their building work is also for civilian purposes, maritime research and to facilitate safe navigation of ships in that area, he added.

"So time will tell as to what China's intention is. In the meantime we have got to accept the reasons given by the government of the People's Republic of China as to the purpose of the development of these islands," Zulkefli said.

"I hope that it is for good purposes and the purposes of all human kind."

Malaysia has generally adopted a cautious line in its dealings with Beijing over disputed territory in the South China Sea, in contrast to Vietnam and the Philippines, which have railed against perceived Chinese expansionism.

Earlier this month China said it had completed lighthouses on Cuarteron Reef and Johnson South Reef in the Spratly islands which will help maritime search and rescue, navigational security and disaster relief.

China will continue to build such facilities, he added, without elaborating.