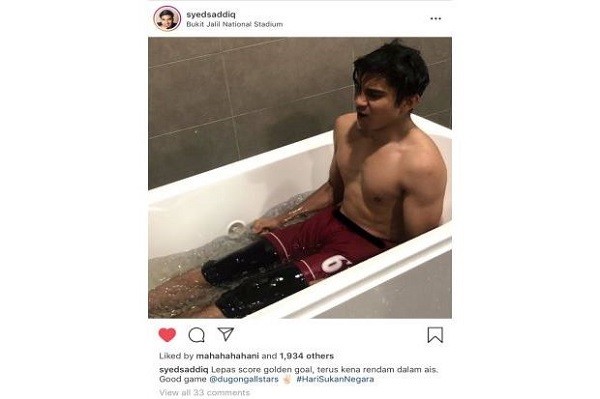 PETALING JAYA - Syed Saddiq Syed Abdul Rahman, who posted a photo of himself soaking shirtless in a bathtub on social media, has drawn criticism from Malaysians.

The photo showed the 25-year-old, who became the youngest ever minister in the country, immersed in cold water therapy after a friendly football match that was held in conjunction with Hari Sukan Negara 2018 on Saturday (Oct 13).

Syed Saddiq, on his Twitter account, had exposed his well-defined abs to his 613,000 followers by posting a picture of himself soaking in ice water in a bathtub.

Some Malaysians, however, described the post as unbecoming of a minister.

Syed Saddiq's Choice team had played against Dugong Allstars, a team made up of local celebrities, on Saturday afternoon.

His team won the match 4-3, with the minister scoring the decisive goal.

It is common practice among athletes to soak themselves in ice water after training or after a competition.

The therapy is said to provide relief for muscle pain and soreness.