Shopping for Lunar New Year decorations at a market in Chinatown, Malaysia.

The Malaysian government’s hasty policy U-turn regarding an important Lunar New Year family dinner event has done little to mollify its ethnic Chinese citizens, who have criticised not just the measures but also the government’s policy inconsistency on the matter.

The government on Sunday loosened its policy regarding the so-called reunion dinners, which are held on Lunar New Year’s eve, saying that as many as 15 people, all of whom must live within 10km of the dinner venue, could attend any single gathering.

Its previous policy on the matter – implemented to combat the spread of the coronavirus – was that the gatherings would be limited to members of the same household, with no outside guests allowed.

The government also said Buddhist temples could open on Lunar New Year’s eve and day – February 11 and 12 – for prayers, as well as on February 19, which is considered a special day for Hokkien Chinese, with a cap of 30 individuals in any one temple at any given time. The original rule was that temple openings during the holiday would be limited to five committee members for a single temple.

The original measures, which were passed earlier this month, had come under heavy criticism from politicians and cultural groups, who pointed out that the restrictions on the dinners and temple gatherings contrasted sharply with the government’s decision to allow “pasar malams”, or night markets, to continue to operate freely.

Malaysian-Chinese had joked that they could hold their reunion dinners at the night markets instead of holding them as restricted affairs at their homes, but would be taking a risk either way.

Members of the Malaysian Chinese Association, a political party aligned with the government, were also incensed by the original regulation.

“Someone has screwed up totally here. This [regulation] must be quickly withdrawn and rectified!” tweeted Ti Lian Ker, a deputy minister in the Prime Minister’s Department.

In a rare occurrence where rival parties found themselves on the same side, opposition coalition strongman Lim Guan Eng urged the government to re-examine its original regulation, asking: “If my parents live down the road, are they supposed to celebrate and eat alone, and cannot be visited by their family members?”

Others pointed out that celebrations for Christmas, the Hindu festival Deepavali and the Muslim Hari Raya or Eid holiday had been able to carry on within specific parameters that were viewed as less severe than the ones imposed for Lunar New Year, and that ethnic Chinese in the multicultural nation deserved the same concessions.

In a statement, the Malaysian Health Coalition urged the government to “ensure the predictability and consistency” of regulations – which are known as SOPs in Malaysia, for “standard operating procedures” – especially when culturally sensitive rules are implemented during festive seasons.

“The people should not need to wait for new SOPs every time another celebration approaches,” it said.

“There must be predictable and consistent SOPs for cultural and religious celebrations to avoid confusion and optimise compliance” to such rules, which should reflect the “reality” of the coronavirus pandemic.

Some Chinese-Malaysians said they would rather abide by the original restrictions on reunion dinners and temple gatherings rather than risk contracting the coronavirus, which has been surging, with 242,452 total cases and 872 deaths reported and the country in its second full lockdown.

“Even with the change in SOPs, we‘re still not having a reunion dinner with the larger family and are just having dinner with people living in our house, said Nicole Fong, a 26-year-old researcher. She said someone in her family had contracted Covid-19 during Christmas, and so the rest of the family members were now “too scared to meet”.

She also criticised the government for not doing its “research on what reunion dinners are” and for lumping “all the other Chinese-related festivities together as one”.

But Ong Ooi Heng, chief executive of the KL-Selangor Chinese Assembly Hall, commended the government’s decision to revise the original measures, saying the new, relaxed rules were “much better”, even though he said he felt the government may have been “confused” about what day family reunion dinners fall on.

“But now we have it cleared up, people should respect and follow” the new rules and “not try to have larger dinners or travel further than they should”, he said. 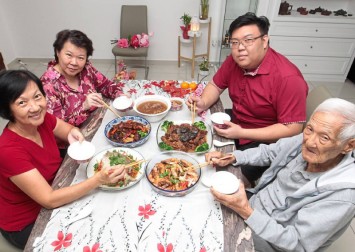 For Quek Yew Aun, a 29-year-old civil servant, the Lunar New Year holiday will be a quiet affair that he said he would spend at the office.

“I’ll be working, as I can’t travel back to my home state,” said the Kuala Lumpur resident. “I expected and accepted this.”

Under Malaysia’s current national lockdown, travel is limited to a 10km radius within one’s home, except in cases of health emergencies, and large gatherings are banned. But this lockdown is far less severe than the first one, which was in place for several months last year and heavily restricted activities in the country.

The country also declared a state of national emergency last month to stem a third wave of coronavirus infections. The emergency is in effect until August.

In neighbouring Singapore, Malaysians who live in the city state noted the clarity of the government’s Lunar New Year procedures compared with Malaysia’s.

“In Malaysia there are much higher case numbers and [Covid-19 is] clearly still spreading,” said Gabriel Chen, a 27-year-old graduate student. “Allowing home visitations is not a good idea. But given that the government has allowed night markets and hairdressers to operate, it appears they are ignoring the science behind how the virus spreads and instead are prioritising specific sectors of the economy.”

The Perikatan Nasional government, which took power in February 2020, just days before the first national coronavirus lockdown was announced, has been the object of widespread criticism for its handling of the crisis. Last year, it came under fire after several of its politicians were seen breaching the country’s movement control orders but escaped being fined or arrested.

The perception that a double standard exists in the country hit home with ordinary Malaysia, who have had to deal with not only the coronavirus, but the sluggish economy, slashed incomes and rising unemployment that have come with it.