Malaysian-Chinese student gets online fame for speaking fluent Punjabi, but she knows other languages too 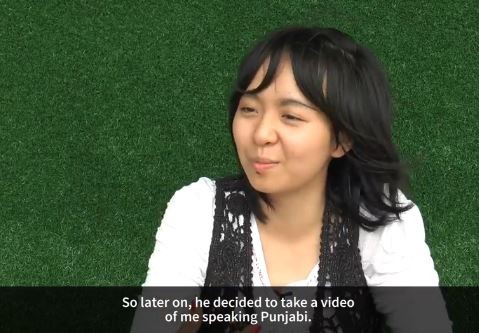 KUALA LUMPUR - Multilingual student Krystal Lim (pic) did not expect her chance encounter with a Punjabi speaker to go viral on social media.

Lim said she was simply being polite and greeted the stranger in Punjabi when they crossed each other's paths in Pandan Perdana here late last month.

Rishiwant Singh Randhawa, 43, who is now a friend of Lim's, was so impressed with her mastery of the language that he recorded their conversation and posted it on Facebook.

He was having tea at a restaurant when Lim greeted him and he decided to record a video of their conversation because he thought it was "unique" that Lim spoke in a thick, unrehearsed Punjabi accent.

Lim said she was surprised to learn that the video had gone viral.

"I didn't expect that to happen! I just said 'hi' to him in Punjabi, and he followed me all the way to the mobile store.

"I was reloading my mobile credit and only realised that someone was recording a video of me when the store owner alerted me," she explained.

Lim said she was oblivious to her fame on social media until a friend told her that he had watched the video.

"I thought he was joking, but later found out he was telling the truth," she said.

Lim said she took up Punjabi five years ago by listening to her friends speak the language.

She also learnt to speak Hindi by observing her friends.

"I had basic conversations with my friends in their language, but didn't learn it formally," she added.

Although the responses from netizens to Lim's multilingual skills have been overwhelmingly positive, she was still taken aback by some comments questioning her ethnicity and whether or not she was adopted.

"People shouldn't jump to conclusions. Some people assumed I was adopted, or that I was an Assamese from India.

"I developed an interest in learning languages in secondary school.

"The more we learn about other people's culture, the more it helps widen our perspective in life.

"We can also make new friends from all around the world," she said.

Besides Bahasa Malaysia, English, Mandarin, Cantonese, Hindi and Punjabi, the polyglot has taken up lessons in Japanese, French and Spanish.

Lim, an only child, is studying at an international college in Taman Maluri, Cheras.