Malaysian climber crushed by pillar at Lombok homestay during quake

A screen capture from the Facebook page of Siti ﻿after her mission to scale Mount Rinjani in East Lombok.

PETALING JAYA - Hours before Siti Nur Iesmawida Ismail was tragically killed in the earthquake that struck Lombok, she had successfully climbed Mount Rinjani, the se­­cond highest volcano in Indonesia.

The 30-year-old from Melaka had captured the moment with a picture of her at the summit, captioned "I DID IT!!"

Six other Malaysians were in­jured in the 6.4 magnitude earthquake that struck just before 7am local time yesterday.

Businessman Khairul Azim said although he did not personally know the victim, he met the group she was in when they were trekking up Mount Rinjani.

The volcano is a well-known spot for hiking in Lombok, which is po­­pular with tourists from Malaysia.

He said the earthquake struck when his group were at the base camp while Siti's group was at a homestay, several kilometres away.

"I think we were lucky because we were staying in tents and not in a building," he said.

According to reports, Siti was crushed by a pillar.

She died at about 8am on arrival at a local clinic.

Khairul said his group was currently in East Lombok and resting before making their journey out.

"We can still feel tremors from Sembalun. Many roads are still blocked," he said.

No one in his group was injured. 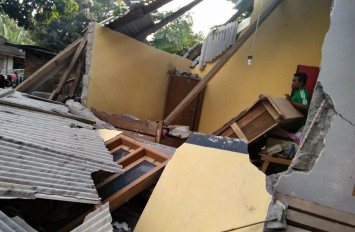 Meanwhile, some 30 Malaysians are still trapped at the foot of the mountain.

One of them, Nursakinah Has­man, had taken to Facebook from Perkampungan Senaru, near Mount Rinjani, saying that her group needed helicopters to be lifted out.

"The road here is badly damaged. The nearest airport is three hours away. The tremors are getting more frequent and 3G is getting slower. Please be quick and save us," she wrote, adding that at the moment, the Indonesians had given them food and shelter.

She later wrote that they ma­naged to drive out of the area with 19 other Malaysians but nee­ded help to change their flight ti­­ckets back to Malaysia.

Another Malaysian, Suriyanita Sidek, posted on Instagram a video of her and other Malaysians at a temporary evacuation campsite at Senaru village.

Deputy Prime Minister Datuk Seri Dr Wan Azizah Wan Ismail said the remains of the victim would be brought back to the country as soon as possible. 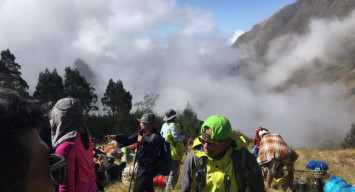 Separately, the Fo­­reign Affairs Ministry confirmed that one Malay­sian died and six others were injured due to the earthquake in Lombok.

The Malaysian Embassy in Indonesia, it said, had been in touch with the local authorities and rescue efforts are ongoing.

"The embassy has also contacted the victims' next of kin," the ministry said, adding that it was also trying to identify other Malaysians on the island.

The embassy has activated an operation room and Malaysians in Lombok, who need consular assistance, can call +62 2152 24947 or WhatsApp +62 813 8081 or e-mail mwjakarta@kln.gov.my and consular@gmail.com.