PETALING JAYA - Cosmetics millionaire Datuk Seri Vida says she's not ready for a new relationship but if fate decrees it, she hopes that it would be with someone who will care for and love her children too.

Recently, her personal assistant Ahmad Iqbal Zulkefli, 23, said he has fallen in love with the 46-year-old businesswoman, adding that he was willing to be her husband.

"It is normal for me because many have confessed their love to me," she told mStar, The Star's Malay-language portal, without alluding to the identity of the individual.

However, Vida whose real name is Hasmiza Othman, said she was not ready to accept the individual's proposal.

She said her priority now is to find a man who can love her two children, Edlynn Zamileen Muhammad Amin (Cik B), 12, and Muhammad Eric Zacquan (Kacak), 10, as his own. 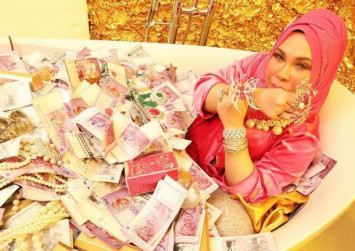 "It is undeniable that I want a man who can care for me and love my children and me, but I have yet to find that someone truly special.

"Cik B and Kacak need to be given attention, they are still traumatised from my divorce.

She also said she has to take into consideration her family's opinion about her getting into another relationship, adding that her sister was concerned about individuals who were only after her wealth.

When asked about her relationship with her aide Ahmad Iqbal, Vida denied that they are in a romantic relationship.

"We are employer and employee, there is nothing more between us," she said, adding that they have a comfortable working relationship.

Vida said she does not mind dating a younger person and leaves it to God's will.

"I don't mind as long as the man is the best for my children and me. The most important thing is that my children give their blessings to the relationship," she said.